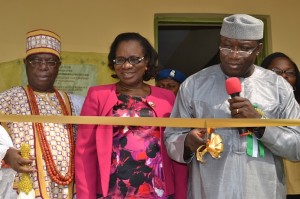 Governor approves promotion of 1,994 teachers With a record as the state with the lowest number of out-of-school children in the country, Ekiti State Government yesterday said it had sunk N2 billion of its resources on the redevelopment of primary education and the refurbishment of the physical environment of schools.
The government also said the state ranks among the first in the payment of the counterpart funding of the Universal Basic Education (UBE) scheme between states and the federal governments.
Governor Kayode Fayemi, who made the disclosure at the inauguration of a storey building of six classrooms at the Odundun Nursery and Primary
School, Ogbon Oba, Ado-Ekiti, said the disbursements were made in the past three years when his administration took the saddle.

According to him, the amount included the counterpart fund for 2011 and 2012 and investment on the construction of new classroom buildings, renovation of dilapidated classrooms, repair of schools affected by rainstorms and the supply of instructional materials and furniture for teachers and pupils.
The governor said his administration has approved the promotion of 1,994 teachers and professional allowance as morale booster for the teachers.
Besides, the governor told his audience, which included deputy governor, Prof Modupe Adelabu, Education, Science & Technology Commissioner, Mr. Kehinde Ojo and Ado-Ekiti Monarch, Oba RufusAdejugbe, that the government has established three Mega Early Child-Care Development Centres since he came on board.
The centres he said, are in each of the three Senatorial Districts in Ado-Ekiti (Central); Ikole-Ekiti (North); and Ikere-Ekiti (South).
He noted that the centre in Ado-Eikti, which was inaugurated during the third anniversary of his administration, has since become operational.

The governor, whose address was read by his deputy, reassured that education, which is the fourth on the scale of his administration’s Eight-Point Agenda, will be vigorously pursued to a logical conclusion.
Fayemi enumerated other significant steps to reposition basic education in the state to include: the procurement and instructional material and other tools to 836 public primary schools and 183 Junior Secondary Schools (JSS) at a cost of N106 million.
He explained further that the state government also introduced “Reading Parents” programme which he personally flagged off in February last year to enhance academic performance of the pupils while community/village meetings which was also introduced to sensitize parents and guardians has increased pupils’ enrolment in public primary schools.

The governor, who emphasized the importance of teachers in the success of his education agenda declared that good times awaits teachers in public schools as he announced 20 per cent of basic salary as rural posting allowance, car loans and capacity building trainings as incentives to keep them in high spirit.
“Recently, the state government approved the promotion of 1994 teachers and professional allowance to boost the morale of our teachers,” the governor said, adding that teachers in the rural areas would now be given cars instead of the motorcycles earlier announced.
Congratulating the Parents Teachers Association (PTA), the School Based Management Committee (SBMC), teachers and pupils of the school, the governor urged them to make good use of the building for effective teaching and learning.