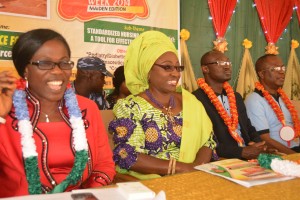 The June 21 governorship election in Ekiti State has been described as a watershed that will determine the future prosperity of the state, sustainable peace and wellbeing of its people.

The Wife of the Governor, Erelu Bisi Fayemi, said this during the Ekiti State University Teaching Hospital’s inaugural Nurses’ Week, held at the School of Nursing, Ado-Ekiti, on Thursday.

She was decorated as the Grand Matron of the EKSUTH unit of the National Association of Nigeria Nurses and Midwives at the occasion.

The First Lady said the forthcoming election transcended the aspiration of the Governor, Dr. Kayode Fayemi, and the All Progressives Congress to rule the state for a second time.

She stated that the electorate owes the future generation a sacred duty to scrutinize the antecedents of candidates jostling to govern the state from October before pitching their tent with any of them.

Fayemi said, “This election is just not about Governor Kayode Fayemi or the APC. It is about the future of Ekiti and our children. This election will determine what the state will look like in the next 15 years.

“What do we want Ekiti to be like in 10 to 15 years down the line? Do we want an Ekiti that will continue to be inheritor of chaos, disunity, misgovernance, looting of state treasury or of a lack of future for our children?

“Will it be what it was in the recent past when people ask us how we came about having certain people as our leaders? Will it be like when Ekiti was treated like a pariah among the elite?

“We believe that this election will give us an opportunity to establish a foundation that will ensure that Ekiti becomes the state where other people will come and do business and be proud of. We cannot afford a reversal of our fortunes.

Describing the governor as “intelligent, competent, savvy and focused,” she said Fayemi stood tall among other contenders for the governorship position.

According to her the governor needs another term in office to consolidate on his accomplishments since he mounted the saddle on October 16, 2010.

Fayemi appealed to the nurses to use their positions as grassroots professionals to educate the people on the need for them to vote for her husband whom, she said, had a track record of achievements.

She promised that the government would assist the nurses in the planned construction of a crèche, while she also pledged to donate a bus to the nurses’ association in the foreseeable future.

The first lady added that the governor was hopeful that the Nigerian nurses would be accorded the same recognition and respect being earned by their counterparts in more developed countries soon.

She assured them of building their capacities and quality assurance through overseas and local training to enhance their productivity and cause further reduction of maternal and child mortality in the state.

“As someone who works in the areas of women leadership and promoting women’s rights, I will like to charge all of us here today to take this profession very seriously

“Nurses are teachers in the communities. You are seen as people who are knowledgeable, you are seen as opinion moulders and they look up to you for advice and we hope that you will continue to live up to that expectation.

The Chief Medical Director of the hospital, Dr Kolawole Ogundipe, said that the hospital had employed a number of nurses in special areas to bring more improvement to its healthcare services.

He commended the Fayemi-led administration for making healthcare delivery in the state an envy of others by ensuring quality assurance in term of equipment and manpower.

The keynote speaker, Prof. Reuben Fajemilehin, of the Obafemi Awolowo University, Ile-Ife, spoke on the theme ‘Nurses: a force for change, a vital resource for health.’

He urged nurses to always reflect on their roles with the mind of helping people in distress, adding that he expected the nurses to be very proud of the profession the same way he had been proud of it.

Fajemilehin urged the nurses to maintain professional culture of respect and love for their patients and stressed the need for quality education, which he said was the bedrock of life.