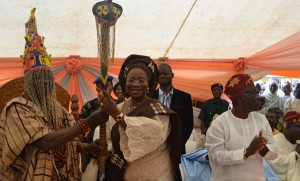 Ekiti Communities embarking on self-help projects are to enjoy government backing. But such projects must be viable and developmental, Deputy Governor Prof Modupe Adelabu has said.

She dropped the hint at Orun-Ekiti during the presentation of the Instrument of Appointment and Staff of Office to Oba Joseph Oluwasola Osalusi, the Oloja  Orun, in Irepodun/Ifelodun Local Government Arae of Ekiti State.

“Government is willing to support in actualizing any viable developmental project embarked upon by communities,” the deputy governor said, even as she urged Orun-Ekiti indigenes to join hands with their monarch for the socio-economic development of their domain.

According to her, the granting of autonomous status to towns and villages by the government in the Land of Honour State was not an attempt to create divisions among communities that had hitherto lived together harmoniously.

She said the granting of autonomy to deserving communities was to ensure development.

Her words: “It must be noted with emphasis that granting of autonomy to any community is not an attempt to unreasonably factionalize or disintegrate a hitherto compact community for any ulterior motive of political gains.

“It is a response to the genuine demand of a people who thought their deserved recognition would enhance their development in all facets of life.

“This exercise is not designed to breed hatred, rancor, nepotism and other negative dispositions that can negate harmonious co-existence with their former allied communities. Therefore, it has no political colouration.”

Congratulating Oba Osalusi, the deputy governor urged the monarch to see his ascension to the throne of his forebears as the first recognized royal father as a divine call to service requiring diligence, sacrifice and perseverance.

In his acceptance remarks, Oba Osalusi described his recognition as the dawn of a new era and a watershed in the history of the community.

The monarch who listed the needs of the community promised to cooperate with the state government for the successful delivery of its Eight-Point Agenda.

His words: “Here in Orun-Ekiti, the best has happened to us through your Solomonistic wisdom and by the law orf reciprocity, our covenant with your government is abosolute and total deliverance of our responsibilities in the day of reckoning.”