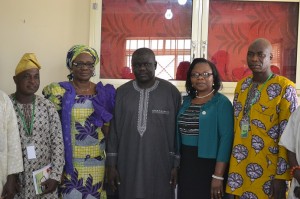 Farmers in Ekiti State has gotten an assurance of government’s support.  They were told that everything would be done to make farming less-stressful and to achieve bumper harvest.

The assurance was given by the Deputy Governor, Prof. Modupe Adelabu, when a  delegation of the local chapter of All Farmers Association of Nigeria (ALFAN), paid her a courtesy visit  at work in Ado-Ekiti.

She told her guests that Mechanization of Agriculture ranks third on the government’s Eight-Point Agenda and that the Governor Kayode Fayemi administration was determined to achieve its dream of making Ekiti State self-sufficient in food crop production for exports to other parts of the country.
Describing as regrettable that many people, especially the youths have abandoned the practice of agriculture to the elderly, she urged those
still engaged in farming not to quite as the venture is quite lucrative and rewarding.

The deputy governor listed the purchase of tractors, supply of agro-chemical and revolving loans to farmers as parts of the incentives introduced into agriculture by the Fayemi-led administration to attract the youths.
According to her, the government was already looking into other challenges confronting farmers in the state with a view to addressing
them accordingly.
Speaking earlier, ALFAN’s Deputy Chairman in the state, Mr. Ojo Gbadebo, commended Governor Fayemi for the various steps already taken to assist farmers and boost food production in the state.
He said that farmers could not be neglected because of their invaluable contribution to the development and economic sustenance of a nation as the producer food crops that feed the populace and the cash crops that feed many industries that sustain the nation’s economy.
Mr. Gbadebo therefore urged the government to give more assistance to practicing farmers in the state, especially in the supply of mechanical tools, improved seedlings, agro-chemicals and other logistics that will enable them produce massively will less labour like their counterparts in the north.