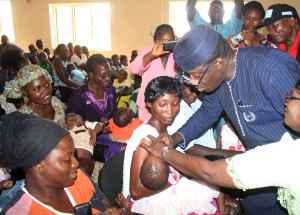 Ekiti State Governor, Dr Kayode Fayemi, administering the Polio Vaccine to a child, during the Flag-off Ceremony of the May 2014 Edition of Maternal Newborn and Child Health Week, (MNCHW), in Ado-Ekiti.

The Ekiti State Government has expended N266 million on the extension, renovation and upgrading of 18 secondary health facilities as well as 35 upcoming Primary Health facilities in the state to international standard.

The State Governor, Dr Kayode Fayemi, made this known in Ado-Ekiti on Friday at the flag off of the May 2014 Maternal, Newborn and Child Health Week organized by the State Primary Health Care Development Agency in partnership with UNICEF.

Governor Fayemi who stated that the fund was expended on the facilities in order to create a more conducive environment for health workers to effectively carry out their duties, assured that his government would leave no stone unturned in the quest to improve health care delivery hence the need to strengthen human resources.

While reiterating the commitment of his government to health care delivery, reduction in maternal and child mortality and the attainment of health related MDGs, Governor Fayemi said the present
administration frowns at the death of pregnant women or newborn babies through preventable causes.

He stressed that this was why his administration put in place the Free Health programme as one of his cardinal agenda to give free medical treatment to the aged citizens above 65 years, pregnant women,
children under five years and the physically challenged.

The Governor disclosed that the health scheme has treated 9, 298 children; 8,398 pregnant women, 19,531 elderly citizens and 225 physically challenged citizens at no cost.

Fayemi, who said that the free mobile health mission that compliments the free health programme has also attended to over 500,000 citizens since 2011, asserted that his administration has disbursed over N190 Million to procure local and overseas referral services for citizens who needed urgent medical assistance.

He assured that the present government in the State would continue to prioritize the wellness of the citizenry especially the vulnerable segments of the population in line with the promise he made to them in his 8-point agenda.

In his remarks, the Commissioner for Health, Prof. Olusola Fasubaa said the exercise will be carried out in all 293 health facilities and outreaches in the State and urged mothers to take all eligible children out for vaccination.

Fasubaa said the various health intervention initiatives of the Dr Fayemi-led government have reduced case specific mortalities, improved life expectancy and bringing the State’s health indices very close to the expectations of the MDGs by 2015.