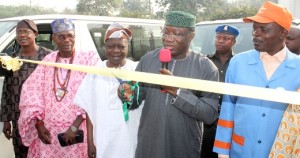 Ekiti State Government has presented eight 18-seater  passenger buses to some organisations  in the state, including the Federal Radio Corporation of Nigeria (FRCN) Progress FM, Ado Ekiti;  the state chapter of the Nigerian Labour Congress (NLC) and the Trade Union Congress (TUC), in fulfilments of the government’s pledge to assist them in carry out their duties.

Others who also benefitted from the government largesse include the Nurses and Midwives Association; the Ebira Community; the State Timber Traders Association; State Sawmillers Association and the National Automobile Technician Association.

Presenting the buses in Ado Ekiti on Friday, the State Governor, Dr Kayode Fayemi said the gesture is aimed at strengthening the capacity of the associations to continue to work in harmony with the people of the state.

Dr. Fayemi who noted that there is no harm in providing logistics for the associations stated that the benefiting organizations have contributed immensely to the socio-economic stability of the State even as he said that the Timber Traders association is one of the largest employer of labour in the State whole the Ebira community has played a crucial role in the development of the State agricultural sector.

He emphasized his readiness to provide support for any organization which seeks to provide employment opportunities for the teeming unemployed population in the State.

“There is no harm in supporting the associations with logistics for their association activities. They had approached government last year to get the passenger vehicles in pursuit of their work in the state. They will use it for the benefit of their members and pursuit of their profession which have employed sizable number of the teeming unemployed population. We must do everything to support organizations which provide jobs and create the enabling environment to create more jobs”, he said.

In his remarks, the General Manager of Progress FM, Pastor Dare Olorunfemi said the problem of mobility in the station predates the emergence of Governor Fayemi but commended him for dedicating himself to solving problems which his administration had inherited.

The General Manager added that though the Governor sees the gesture as a mere presentation of vehicle, the station sees it as “a bond and motivation to serve the people of Ekiti State better”.

Also speaking, the State president of the National Automobile Technician Association, Mr Olubodun Olasehinde thanked the Governor for the bus, saying that this was the first time a government would recognize the association and give it logistics to pursue its set goals.

He assured that the association would give support to the present administration and ensure its success beyond 2014.