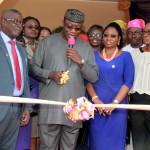 Wife of the Governor of Ekiti State, Erelu Bisi Fayemi has inaugurated a multimillion naira building for the use of the Obafemi Awolowo University Centre for Gender and Social Policy Studies in Ile Ife, Osun State.

Mrs Fayemi who is an alumnus of the varsity while inaugurating the project on Monday said the project was undertaken as a way of giving back to her Alma mater which had made her what she is today.

The Wife of the Governor stressed that the building was not constructed with public funds rather it was a product of donations from friends and corporate organizations who saw her genuine commitment to gender issues.

“I am aware that there are some who will think that of course she can donate a building, after all she is the Wife of a Governor and all she has to do is ask her husband. Last year June, I turned 50. I saw this as an opportunity to put all what I had been advocating for into practice. Some of my friends within and outside Nigeria got together and asked me what I would like as birthday gifts. I told them that nothing would please me more than to see this Centre built. I asked that my gifts should be donations towards this project, or launch of my books, with some of the proceeds also going to the Ekiti Development Foundation, which I established in June 2011”, she disclosed.

Erelu Fayemi who described the project as “a dream come true” explained that she chose to build the Centre as a result of her “life
long commitment to the political, economic, emotional and intellectual empowerment of women”.

She said her years of studentship at the University exposed her to not only the critical importance of an enquiring mind but also the need to develop skills that will be useful throughout her lifetime.

Mrs Fayemi called on other alumni of the University to return home and contribute their quota to the development of the institution.

Also speaking at the event held at the event, Governor Kayode Fayemi said the privately funded initiative is a function of Mrs Fayemi’s understanding of “the role that Alumni ought to play as critical stakeholders in ensuring the sustainability of the quality of scholarship in our institutions”.

Fayemi who is also an alumnus of OAU added that it is a global practice for alumni of leading educational institutions to commit their “time and resources to ensuring the light that illuminated their lives’ paths remain bright enough for generations coming after them to find their own way”.

He stressed that alumni need to complement the role of government in ensuring functional tertiary education in Nigeria.

Fayemi explained: “I therefore take this opportunity to call on other alumni of our Great Ife, to find ways in which we can take the glory of our institution to greater heights – Government cannot do it alone. Nowhere in the world is the huge capital and human resources required for functional tertiary education left alone for Government; we must follow the lead of developed countries in the world, who have institutions that have endured for several centuries because of the active involvement of crucial stakeholders such as the alumni body.”

The Governor advised other alumni of the institution who have the intention to give back to the school to consider the area of Gender Equality and Empowerment, “so that in these days that the girl-child and women in our society suffer from untold discrimination and hazards to their health, well-being and future prospects, the Obafemi Awolowo University, Ile-Ife can become that beacon of light where the next generation of activists and practitioners can be empowered with knowledge to effectively champion the cause of equality in our country”.

The Vice chancellor of the University, Prof. Tale Omole in his remarks said wide gaps existed in the varsity until the early 2000 when a gender audit was carried out and several strategies were designed to close the “identified gender gaps”.

Omole said Mrs Fayemi’s donation of the “fully furnished building with a well stocked library” is a demonstration of her passion for gender justice and commitment to reversing gender discrimination.

The vice Chancellor disclosed that the Governing Council of OAU has decided to name the Centre Bisi Adeleye-Fayemi Centre for Gender and Social Policy Studies after Mrs Fayemi for meeting the school’s requirements of the Gifts and donations Policy on naming.

“This centre will serve as the permanent site of the centre. Of all our alumni in the country and in diaspora, Erelu fayemi has stood out in the development of this institution. You are the very first alumni who will commission a building in the last 50 years. Your commitment to gender issue is the reason for this. What you have done is to deepen gender policies and fight gender harassment. The governing council of the university has decided to name the centre after you. What you have done will be a model for those who are thinking of what they can do for their alma mater”, Omole said.
In attendance at the event were Ekiti state Deputy Governor, Prof. Modupe Adelabu, top government functionaries of Ekiti State government and principal officers of OAU.