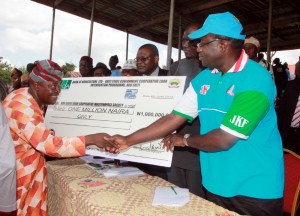 The Ekiti State Government on Wednesday disbursed cheques totalling N60 million as first tranche of loans to 48 cooperative societies belonging to the All Farmers Association of Nigeria (AFAN) as well as various farm commodity associations in the State.

The State Governor, Dr Kayode Fayemi who handed out the cheques at the launch of the Farmers Loan Support Programme held in Ado- Ekiti said the intervention is in fulfilment of his promise to support cooperative farming in the State.

He said farmers who still owe other previous but similar disbursements are excluded from the scheme so that this could serve as deterrent to erring farmers that hitherto had hindered others from benefiting from government support.

The Governor said: “I make bold to say that my government is doing everything possible to give agriculture its pride of place. You will recall my promise to support cooperative farming in the State. I am glad to inform you that we have not reneged on our words and have been working to ensure fulfilment. Today, I can assure you that 48 AFAN Cooperatives will be supported as well as individual beneficiaries drawn from various commodity associations including the Poultry Association, Fisheries Association, Cocoa Growers Association, the Butchers and Ekiti State Farmers Congress. I wish to state that a total of N60 Million is being released in this first tranche”.

While hinting that the Agbeloba Agric Forum held in the State last year has proved productive, the Governor said the State’s partnership with the Bank of Agriculture has yielded a 50-50 contributory loan facility of N600 million for agricultural development.

Fayemi commended the Bank for the gesture in empowering farmers in the State; saying that the effort will help achieve the various agricultural development drives of the State.

He charged the beneficiaries of the loan to make judicious use of it as well as ensure prompt repayment of the loan to enable others benefit from the scheme.

In his remarks, the Chairman of AFAN in Ekiti State, Mr Ademola Okeya thanked the present government for the several aids given to resuscitate the agriculture sector in order to make the State the food basket of the South West.

Okeya who said that the Association of Farmers will vote for the re-election of the Governor assured that the association will put in place necessary measures for the prompt repayment of the loan.