Featured, NewsEkiti Deputy Governor To Voters: Be Wary Of Greek Gifts From Politicians

Ekiti Deputy Governor To Voters: Be Wary Of Greek Gifts From Politicians 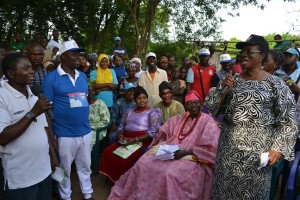 Voters in Ekiti State have been warned to be wary of Greek gifts from politicians jostling for their mandate in the Saturday governorship election in the Land of Honour of State.

The Deputy Governor, Prof Modupe Adelabu gave the warning during a voter sensitization tour of some communities in the Ado Local Government Area of the state. She spoke at Kajola, a farm under the Ado council area.
She cautioned residents to pull the break in accepting raw food items and monies being distributed by desperate governorship candidates, who according to her are fair-weather politicians.
Mrs. Adelabu noted that such largesse was to deceive the people, pointing out that only the ruling All Progressives Congress (APC) party has their genuine interest at heart.
The deputy governor told the people to invest in the progress of the state and in the future of their children by returning the APC-led administration into office rather than trade their conscience for a pot of porridge.
She assured Kajola residents that the shorter route to their community which had been abandoned will be rehabilitated, even as she urged them to keep a tab on the punctuality of teachers deployed in the Community Primary and Nursery School, located in their domain.
According to her, residents, who are predominantly farmers, can take their produce to the market with the planned rehabilitation of the road, even as she reminded that the promise can only be fulfilled if they endorse Governor Kayode Fayemi for another term through the ballot on Saturday.
One of the community leaders, Mr. Benjamin Ayodele said the people will not let the APC down with their votes at the poll.
Also speaking, Mr. Gabriel Eje, stressed the need to urgently rehabilitate the road, connect the community to the national grid and provide portable water for residents, noting that the rural electrification embarked upon by the government has not been completed.
Former chairman of Ado-Ekiti local government area, Chief Bisi Egbeyemi, who was in the entourage of the deputy governor had earlier noted that Kajola has legendary record of progressiveness.
He told his audience that the governor has judicious applied the limited resources accruing to the state.