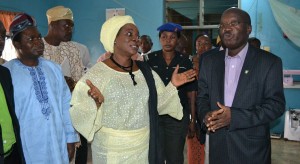 Radiotherapy unit coming for teaching hospital, says Health Commissioner Ekiti State Deputy Governor Prof Modupe Adelabu has urged specialist to conduct a research into the cause of cancer of the eye among children.

She spoke even as Health Commissioner Prof Olusola Fasuba hinted of plans by the state government to have a radiotherapy unit established in the Ekiti State University Teaching Hospital (EKSUTH). Ado Ekiti.

Prof Adelabu said the time to do such research is now when two kids, (Daniel Popoola and Kolade Abegunde), aged two and four years have tumour growing on their right eyes.

Both kids are being treated for cancer of the eye at the instance of the deputy governor, who encouraged their parents to cheer up and hope for the best.

Prof Modupe Adelabu, who visited Daniel and Kolade Abegunde and their parents, at the Intensive Care Unit (ICU) of the Children’s Ward of the teaching hospital, told Prof Foluso Owoeye and Dr Omotoye Olusola – both consultant ophthalmologists in charge of the kids’ treatment, to give the research a thought.

The commissioner, who was also at the hospital to receive the deputy governor said: “In fact, I want to let you know that by October ending, the radiotherapy unit would have been functioning here at the teaching hospital,” the commissioner said.

Informing that one of the kids would soon be referred to the University College Hospital (UCH), Ibadan for radiotherapy, the
commissioner noted that EKSUTH presently has facility for chemotherapy.

His words: “Surgery has been performed on the affected eye of one of the kids. The other is undergoing chemotherapy. By the time we are through with that, he would go for radiotherapy at Ibadan.

“We are going to have such facility here very soon and it is going to be the best in Southwest Nigeria. We have a consortium from England, United Kindgom (UK) and they are bringing it down to the state.”

The commissioner expressed concern over the rising wave of cancerous tumour among children and urged parents whose children have been infected to bring them for treatment.

He said: “There are lots of people having the challenges but hiding in their homes. I want them to come to the teaching hospital before it is too late.”