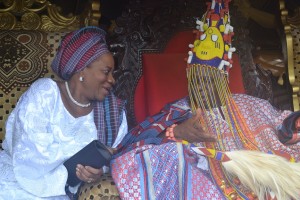 Ekiti State Deputy Governor, Professor Modupe Adelabu and the Ewi of Ado-Ekiti, Oba Rufus Adeyemo Adejugbe III during the 2013 Udiroko Cultural Festival held at the Palace Ground of the Ewi.

Ekiti State Deputy Governor, Professor Modupe Adelabu has called on sons and daughters of Ado-Ekiti to sustain their cooperation and support for the Ewi of Ado, Oba Rufus Adeyemo Adejugbe.

She said their support was necessary for the town to continue to witness further development.

The deputy governor made the call in her remark at the 2013 Udiroko Day festival held at the palace ground of the Ewi, in Ado-Ekiti.

Adelabu noted that the unprecedented development the town has witnessed in the last one year was partly due to the support, cooperation and mutual understanding that the people have for the paramount ruler and their readiness to work together for the progress of the town.

The deputy governor also used the occasion to remind the people of the regard the government of Governor Kayode Fayemi has for the indigenes by appointing sons and daughters of the town into key positions and enjoined them to continue to support the administration at all times.

She urged indigenes to reciprocate the good gesture by their continued support for the administration and to protect public facilities provided in the city centre.

Prof Adelabu, who is also a princess of Ado-Ekiti, charged indigenes, especially those in the Diaspora to make it a point of duty to attend Udiroko festival, noting that the yearly event has been serving as rallying point for indigenes.

Speaking on the significance of the festival, Mrs. Adelabu said there was nothing fetish about it, but purely cultural festival to usher-in or mark the beginning of a new year, adding that the state government was already compiling such festivals that will be developed to international standard.

Her words: “It marked the beginning of a new calendar year for sons and daughters of Ado-Ekiti. As you can see, it was very colourful and there is nothing fetish about it. That is why I identify fully with it.

“My advice to all sons and daughters to continue to support the Oba because it only when they support the leader that the town will witness more progress.”