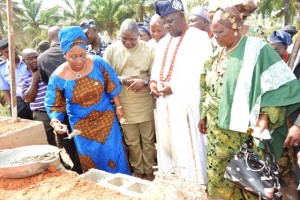 Ekiti State government has begun the construction of modern neighbourhood markets across the sixteen local governments of the state, estimated around N2 billion.

The project is in fulfillment of the promise made through the Wife of the Governor, Erelu Bisi Fayemi, about two months ago when she toured markets across the state to empower traders.

The wife of the governor led top officials of the state to perform ground-breaking ceremony and inspection of project sites in Moba, Ilejemeje, and Oye LGs, on Wednesday.

Contractors handling the markets have been given up till May, this year, to complete projects, with a promise by the First Lady to personally reward the first contractor to do so.

The neighbourhood market is a joint project of the state government and the LGs. They are in different stages of completion in the three LGs visited.

Addressing enthusiastic traders and locals that trooped out to welcome the team at each stop, the governor’s wife said that the project demonstrated that the Governor, Dr. Kayode Fayemi, fulfils his promises to the people.

Erelu Fayemi reiterated the commitment of the administration to fulfill all the promises made to the people of the state as contained in the 8-point agenda.

She advised the people of the state to embrace the present purposeful administration of her husband and be wary of politicians whose stock-in-trade was deceit and empty promises.

She said, “During my outreach to markets across the state last year, one of the things I promised our market women and communities on behalf of the government was to build modern markets as soon as possible.

“Here we are today. This is to show you that this administration is a performing one. I know you will want this type of good things to continue. In the next three to four months. We will come and inaugurate the market.

“This is the season when all shades of politicians will be going around promising you ‘we will do, we shall do’ this and that. They had opportunity of doing what we are doing now in their seven-and-half years, but they did nothing.

“But, in the last three years of this administration it has been a heartwarming story of we are doing this and that. And we are doing more. There will be no dull moment.”

On behalf of the governor, she thanked the women and the people of the state for their unflinching support, urging them to reciprocate the gesture when the time comes.

The Commissioner for Local Government, Mr. Paul Omotoso, commended the visionary leadership and transformational agenda of the governor as evident in plethora of modern infrastructure dotting the state.

Despite placing 35th among the 36 states of the federation on the revenue allocation chart, he said that Ekiti had continued to record massive turnaround in its infrastructure and human capital.

He attributed the feat to the sagacity and prudence of the governor, whom he said did not belong to the class of “come-make-we-chop” politicians.

Omotosho added that government would not spare any effort at ensuring that the people of the state enjoyed more dividend of democracy.

The commissioner advised members of the community to ensure proper monitoring of the projects and report to the LG caretaker committee chairman if they were not satisfied with the pace or quality of work.

At the ceremonies were the Caretaker Committee Chairman of Moba, Mr. Adeleke Adeyeye; and his counterparts in Ilejemeje, Prince Bamigboye Adegoroye and Oye, Mr. Akindele Ogungbuyi.

The chairmen promised to rally support for the second term ambition of the governor in appreciation of his landmark achievements so far.