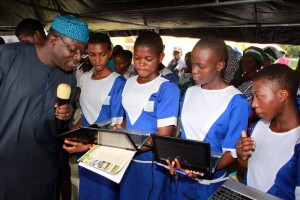 Ekiti State Governor, Dr Kayode Fayemi, accessing a group of Students with their Computer laptops, during commissioning of the State's Digital Transformation Programme, in Ado-Ekiti.

Ekiti State Government again on Wednesday took another giant step towards transforming the state into a knowledge power house in Africa as the Ekiti State Digital Transformation Programme was commissioned by the state Governor, Dr Kayode Fayemi in Ado- Ekiti, the state capital.

The Ekiti State Digital Transformation Programme (EDTP) with a two-prong approach- the Broadband Internet and the Safe City Project -is designed to avail the citizens of the state a fast internet service through the fiber optic cable device and adequate security measure through surveillance cameras installed in strategic areas of the state capital.

Speaking at the commissioning in Ado-Ekiti, Governor Fayemi noted that the state had been enabled, through the project to develop a knowledge based economy.

According to him, the fibre optic cable and other ICT infrastructure will engender entrepreneurial capacity in the youths who will be equipped with high digital skills that are demanded by industries, while facilities like digital library, Pay As You Go computing service, Video conferencing meeting room and product exhibition hall embedded in the project will drastically improve the economy of the state.

Fayemi  noted that with the commencement of Phase 1A of the fibre rollout in September 2013, Ekiti State has started a project that will eventually see the whole of the state connected by the broadband internet.

On the Safe City aspect of the project, the Governor disclosed that surveillance cameras have been installed in strategic locations of the state capital to check traffic congestion and crowd movement, while security agents in the state will have the opportunity to check crimes as they will be able to monitor different places through the device from their offices.

The Governor who assured that the gesture will soon be extended to every nook and cranny of the state maintained that events in the state could be monitored from any part of the world while private organizations would find it beneficial to collaborate with the state government.

The General Manager of ipNX Nigeria Limited, the technical partner in the project, Mr Titus Olowookere, noted that the project will establish a mechanism for planning cooperative maximization of ICT potentials to enhance the lot of the citizens and improve governance.

The safecity project according to him, will lead to effectiveness in the arrests of lawbreakers as a result of timely detection of crime, a reduction in the level of criminality and decrease in the percentage of traffic incidence, solved through the use of video archives.

He commended the state government for taking the bold step, saying no other state including the federal government has been able to achieve the feat.

Highpoint of the event was the demonstration of the internet service and the surveillance camera facilities at the Fajuyi park of the State capital to the delight of people present.

Present at the occasion were the Deputy Governor, Prof Modupe Adelabu, Wife of the Governor, Erelu Bisi Fayemi, Speaker of the State House of Assembly, Rt. Hon Adewale Omirin, members of the National Assembly, the State Assembly and the State Executive council members among other dignitaries.