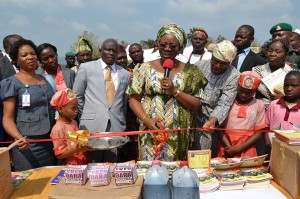 Ekiti Governor Kayode Fayemi represented by his deputy, Prof Modupe Adelabu, cutting the tape to flag off the distribution of textbooks and other instructional materials to basic schools. With her are from left: Special Adviser to the Governor on Government House, Mrs. Kehinde Daramola; Chairman, Teaching Service Commission Chief Bayo Adeniran and Education Commissioner Mr. Kehinde Ojo.

Ekiti State Governor Dr. Kayode took another towards the actualisation of his administration’s education and human capital development agenda. He flagged off the distribution of textbooks and instructional materials to public schools in the state. The beneficiaries are pupils in the basic education level – primary and junior secondary schools.

At a colourful event held within the premises of the State Universal Basic Education Board (SUBEB) on Okeesa Street, Ado-Ekiti, the governor, who was represented by his deputy, Prof Modupe Fayemi, described the distribution as a demonstration of government’s commitment to ensuring qualitative education at all levels.
“The distribution of these text books, library resource materials and other instructional materials jointly provided by the state government and the Universal Basic Education Commission (UBEC) is meant to strengthen agenda 4 of the 8 Point Agenda of this administration,” the governor said.

He explained his administration considered the provision of essential reading materials in schools and library as important as having up-to-date and approved curriculum which the administration has ensured.

Expressing the hope that the materials will be put to maximum use of imparting knowledge on pupils and to achieve the desired result, the governor listed the provision of conducive environment for teaching and learning; adequate motivation of the work force as some of essential facilities already put in place for all-round success at all levels in the education sector.

His words:  “Now that our teachers are highly motivated and Professional/Rural Teachers’ Allowance has also been approved to boost their morale, there is no doubt that, these instructional materials will be put to maximum use by the pupils with the full cooperation and supervision of the teachers.”

In opening remark as the Chairman of Ekiti SUBEB, Prof Adelabu urged concerned authorities to ensure effective, efficient and transparent distribution of the materials.
The SUBEB chair said monitors from the Ministry of Education and SUBEB would be deployed to ensure a hitch-free distribution, even as she assured teachers of their regular promotion and the provision of other incentives that would boost their morale.

In his goodwill message, Mr Sunday Arema, who spoke for the Universal Basic Education Commission (UBEC), described the passion with which Ekiti State has pursued its education agenda as quite commendable.
He lauded governor Fayemi for the commencement of the distribution of the books and other instructional materials without unnecessary delay.
According to Aruma, UBEC has a mandate to ensure the provision of logistics and materials that will improve and consolidate basic education in the nation and these goals the Commission shall continue to faithfully pursue with effective collaboration with state governments and other critical stakeholders.
In his own goodwill message, the Chairman of the local chapter of the Nigeria Union of Teachers (NUT) in Ekiti State, Mr. Kayode Akosile extoled the governor for his laudable programmes in all facets in the state, particularly, the education sector. He said the intervention of the Fayemi administration has restored the glory of education in the Land of Honour State.

Describing the distribution of books and other instructional materials to public primary schools and the Junior Secondary Schools (JSS) as another milestone in the history of education development in the state, the NUT chair noted that posterity will never forget the efforts made by the Fayemi administration to give Ekiti children a better future through the education.

Master Yusuf Rabiu, a pupil of AUD Pilot School, Ajilosun, Ado-Ekiti who spoke on behalf of his peers in the state thanked the governor for his love for them and for all his administration has been doing to give then a solid education foundation on which to build their future ambition.

He promised that beneficiaries will demonstrate their appreciation to the governor by studying diligently and making the best use of the books and the other materials.
Others who gave goodwill messages included: Education, Science &Technology Commissioner, Mr Kehinde Ojo; representative of the School-Based Management Committee (SMBC) Chief Sylvester Adeyanju; Chairman of Ekiti Teaching Service Commission Mr. Bayo Adeniran; representative of Association of Primary Schools Head Teahers of Nigeria (AOPSHON) Mr. Ola Akintoye,  Special Adviser ti the Governor on Chieftaincy Affairs,Chief Aderemi Ajayi and a former Commissioner for Education, Chief Bisi Egbeyemi.