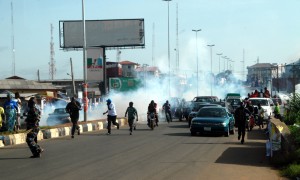 APC members and passers by scampering for safety from rampaging policemen at the Scene of the attack in ijigbo area, Ado-Ekiti.

Men of the Ekiti State Police Command, led by the state Commander of the Mobile Police Unit, Gabriel Selekere, on Sunday morning shot dead a member of the All Progressives Congress (APC) and injured many as they dispersed a peaceful rally held by some members of the party in Ado- Ekiti.

The Police under the supervision of Selekere also held Governor Kayode Fayemi hostage for about 45 minutes at the Ejigbo junction, fired tear gas on the Governor’s car, disarmed and arrested one of the Governor’s security aides.

The APC members who had started their rally aimed at “sweeping the State capital” at Okeyinmi were ambushed by some People’s Democratic Party (PDP) thugs and armed policemen along the popular Matthew junction in Ado- Ekiti at about 8:42am.

The Police led by Selekere first shot tear-gas at the APC members who were scampering to avoid the smoke before the men of the Mobile Police started shooting sporadically, leading to the death of a young man identified as a member of the APC.

Some PDP thugs who were with the Police took advantage of the police presence to  vandalize four branded APC buses and harassed passers-by. Policemen also threatened to deal with some journalists covering the incident. “If you try any nonsense there you would be killed”, they threatened.

When Governor Fayemi got to the scene of the incident, the Policemen continued their shooting spree and shot teargas at his convoy which was apparently at the scene as the Chief Security Officer of the State.

The mobile policemen approached the Governor’s convoy, disarmed three of his security aides and injured one of them while beating him.

The shooting spree continued till around 9:37am when the Commissioner of the Police, Mr Felix Uyanna arrived the scene. The MOPOL Commander, Selekere threatened to arrest the Governor.

“Who?  what Governor? Who is Governor when the VP is in town. I don’t know any Governor. I have order from above”, he yelled, while ordering his men to dislodge the Governor’s convoy.

Governor Fayemi who could not hide his displeasure with the Police asked the Police Commissioner if the action of his men were aimed at protecting the people having killed one person.

He said: “Whose interest are you protecting? CP, I cannot believe this. If I leave here who will protect these people? They will come back and attack them again. I said you beat government house policemen; one of your people arrested them. They even took the rifle of one of my policemen from him.”

Uyanna apparently short of words could not defend the action of his men but urged the Governor to leave the scene; saying that he would protect the people.

Fayemi who later addressed his party supporters said the dastardly act is a rehearsal of what the PDP and the Police intend doing during the election June 21 governorship election.

He said Ekiti people would not allow anybody to return the State to slavery and the era of terror.

Fayemi urged them to continue to be law abiding; saying no one can harm them.

Senator Babafemi Ojudu  (Ekiti Central) Hon Oyetunde Ojo of the House of Representatives  and APC state Chairman, Chief Jide Awe were also attacked in the melee, while the whereabouts of the Commissioner for Integration, Mr Funminiyi Afuye has remained unknown after his encounter with the police.

Also, a Senior Special Assistant to the Governor on Community Development, Mr Sunday Ibitoye escaped death by the whiskers when a tear gas canister landed on the windscreen of his car, shattering the windscreen.

Ojudu said: “We were holding a peaceful rally and before we knew what was happening, policemen started throwing tear-gas. They attacked us; they beat me up and destroyed our vehicles. Four of our buses have been damaged by them. They even killed somebody. They killed one of our members. We will not take this; we are going to resist it. How can you, for God sake, teargas our governor and you say you are protecting us?”

The injured security men and APC members have been taken to the hospital where they are currently being treated, while the corpse of the shot APC member was left at the gory scene.