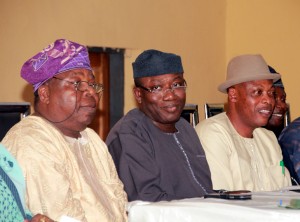 The re-election bid of Ekiti State Governor, Dr Kayode Fayemi, received a boost on Monday  as the State’s local government workers endorsed his candidacy for the June 21, governorship election in the state.

The council workers’ adoption of the Governor came exactly one week after teachers in the State also pitched their tents with Dr Fayemi whom they described as “the true friend of teachers”.

The local government workers who spoke through their representatives during an interactive forum held at the NULGE Secretariat in Ado Ekiti, stated that they knew Fayemi as a promise keeper, who had remained true to all the promises he made to them during the 2007 electioneering and in the various meetings the workers have had with him since his assuming office in 2010.

Speaking at the forum, Mr Itadare Leke said the council workers are desirous of continuous partnership with the Governor beyond 2014 because Fayemi cannot reverse many of the good welfare packages he has provided for the workers when he is re-elected.

While explaining that the reforms made by Fayemi in the local government system were painful at the initial stage, Itadare said the reforms have now paid off with the Fayemi-led government lifting many bars that have hindered the council workers from having career progression.  He  stressed that the council workers have weighed candidates from other political parties and discovered that they are merely making empty promises to cajole them into supporting them.

He stated that the council workers have resolved to adopt Fayemi as their candidate.

He says: “We are desirous of staying with you. We know that Kayode Fayemi will never say what he will not do. We know he will not reverse the various policies he has put in place- The appointments of  Administrative Secretaries , cancellation of the of bar for officers on level 16 to progress to level 17; readmission of sacked workers and over seas training opportunities are some of the things we have benefitted under Fayemi. We are convinced these will continue when he is re-elected. Any other candidate who have come here to talk to us may end up deceiving us.

“Mr Governor I don’t want you to see it as a slight that I did not refer to you as governor,  but as our candidate. We have adopted you. When you came on board, you did some reforms. At first, it was painful but right now, it is paying off. People have said a lot of things you have done for us and we want the good works to continue”.

Mrs Folake Adebayo, the Head of Community Development Department in Ijero Local Government attested that the reform made by Fayemi benefitted her as she had been stagnated on level 14 for 8 years until Fayemi removed the bar that eventually culminated into her promotion as a level 16 officer.

In his remarks, the State President of the Nigeria Union of a Local Government Employees (NULGE), Mr Bunmi Ajimoko, said the interface with Fayemi is a stock-taking event to enable the council workers “look back with a view to projecting what the next four years portends for the local government system”.

The NULGE president stressed that the workers believed that the present administration has good intention in transforming the service hence the removal of bar through the appointment of  five Administrative Secretaries on consolidated salaries, approval for the resuscitation of Pension Department in the Local Government Service Commission to accommodate workers who deployed from PENCOM, and the reinstatement of 12 disengaged directors among others.

Ajimoko reassured that the council workers have good relationship with Fayemi and harbors no fear about the Governor’s re-election on amine 21.

“Let me stress here especially for the doubting Thomases that since we came in last year, we have had a very good relationship with your government and so we harbor no fears about the prospects of your re-election onJune 21. We are therefore optimistic that your visit today will again reassure us in the local government system that post June 21 will be better for us”, Ajimoko said.

The workers also asked Fayemi to clear all arrears arising from the delay in the commencement of the minimum wage following the introduction of e-payment system in the State before June. The arrears are already being cleared on monthly basis.

Governor Fayemi while saying that he is not ready to play politics with the career of the workers assured that his administration will never sack any worker on re-election. He said while his administration would not be able to clear the outstanding arrear by June as requested, he was optimistic that all the arrears would be cleared before the end of the year.

He added that the President of the Union is aware of the State’s purse and that it is not that he does not want to pay.

Dr Fayemi added that he won’t lie to the people in order to get their votes, saying that he had in less than six months fulfilled all promises he made to them during the last interface held with the workers and the workers can still count on his words to pay all arrears before the year ends.

“We may not be able to fulfil everything but one thing you know me for is that I won’t say what I can’t do. I won’t play politics with you. Some can do that because they don’t care about being called liars. Rather than lie to you, I will quit politics because I have a name to protect. I would love to pay all the three months but I won’t play politics with you. I won’t go to any bank and borrow to pay arrears. What I will do and you can hold me responsible for is that I will clear the arrears before the end of the year. There is no candidate who can fulfil this because I know the purse of government. I know it is not possible to clear the arrears before election and I can’t lie to you”, Fayemi said.

Fayemi urged the workers to vote for him come June 21 so that the State would not relapse into the dark days when the State was known as a “State of one week, one trouble”.

“We will take Ekiti to a higher place than it is now. Stability has returned to our land. We can see the impact of peace in our state and that is why never again should our state go back to the dark past when the citizens cannot sleep with eyes closed. I will not disappoint you. Ekiti must not suffer, development must not stop. I am clear that we are all reflecting on our choices come June 21 and I know we will make good choices. I believe that it is a democracy and people have choice but it is better to stay with the one you know”, he urged.

The Governor also presented an 18-seater bus to NULGE in fulfilment of his promise to them at the last interface held earlier in the year.