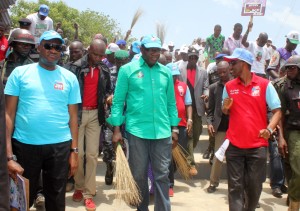 A mammoth crowd in Efon Local Government Area on Friday trooped out to declare support for the re-election of the  the state Governor and candidate of the All Progressives Congress (APC), Dr Kayode Fayemi.

The supporters numbering thousands include teachers, market women, artisans, students and Elderly citizens who premised their support on the performance of the Governor within three and a half years.

Speaking on behalf of teachers who stormed the Efon Alaaye roundabout  venue of the campaign rally,  Mr Olusegun Ojo said the teachers decided to solidarize with the Governor for the transformations he brought to the education sector.

Ojo added that the Fayemi-led administration had improved the welfare packages of teachers even as they are now the best remunerated in the country with different allowances ranging from the rural teachers allowance, core subject allowance and pecuniary allowance accruing to them.

He stressed that Ekiti teachers have no reason to hate Fayemi contrary to the rumours peddled by the opposition who are trying to set them against the Governor. He added that the Fayemi administration had done a lot to empower the teachers in the state for better performance, resulting in outstanding results in external examination.

Market women who also trooped out in large number commended the Governor for the neighborhood markets currently under construction, saying that this will help their businesses to thrive.

The Federation of Efon Students’ Union led by Tunde Olowoyeye also declared support for the governor saying that the investment in the education sector had paid off with an improvement in the results of Senior secondary schools in the State.

Also speaking, ace broadcaster, Chief Ronke Okusanya recalled how the community was intimidated in the wake of the local government election in 2004, saying that the community cannot afford a repeat of the 2004 incident when “residents could not sleep with their two eyes closed”.

A former  Deputy Speaker of the state Assembly and indigene of Efon, Hon. Karounwi Oladapo said Fayemi had enjoyed the people’s support in 2007 and 2009 elections , adding that he still believed in the people’s might to retain him as governor come June 21, 2014.

Karounwi allayed the fears of the people about intimidation from any quarters, saying that they should solidly give their support to the governor.

” God gave him two powers which are mightier than any other on earth. First is God’s power. God’s might has always been with Dr Kayode Fayemi and nobody can take it away from him. The second one is the people’s might, and in a democracy, that’s the ultimate power. He got victory over PDP because of these two powers and we know that God and the people are still behind him and he will never fail”, Karounwi said.

In his remarks, Governor Fayemi stated that he has fulfilled his promises to the people of the local government by providing pipe borne water, good road network and other basic amenities.

The Governor said fulfilment of promises is one of the major differences between the APC and other parties because the APC cares about the elderly citizens , traditional rulers and the vulnerable section of the society.

He said that a government duly elected by the people will always aspire to meet the yearnings of the people  and peace is the hallmark of development in any society.

The Governor explained that he has a good relationship with the teachers because his administration has given priority attention to their well being and will not ask them to do anything that will draw back the progress being made in the sector.

“I have come here to tell you the truth of things and you should not let alone deceive you that teachers and I are not on good terms, and the strides we have made in the education sector are independently verifiable. You can compare Ekiti State University of now to what it was in the past. Ask those in College of Education in Ikere if it is still the same. Those who killed College students and all that we know them for is killing, tell them we won’t allow anyone to turn this State to a battlefield”, he said.