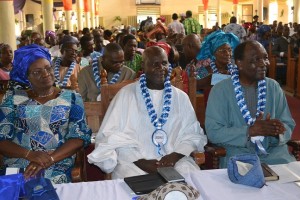 Ekiti State Deputy Governor Prof Modupe Adelabu gave a charge to Christians on Tuesday. She urged them not to relent on their intercession for Nigeria to overcome its myriads of challenges.

The deputy governor noted that the challenges were threatening peaceful co-existence and security in the land, a statement by her media aide, My Bunmi Ogumodede said.
It was in a remark she made at the opening of the 2014 National Board Meeting of the Bible Society of Nigeria (BSN) at St. Paul’s Anglican Cathedral, Odo Ado, Ado-Ekiti, the state capital.
Quoting 2 Chronicles, Chapter 7 verse 14, Prof Adelabu said God will always answer the prayers of his people, especially when they repent of their sinful ways and humble themselves.
The deputy governor, who noted that Christians can only correct the evils of the society by their live styles, charged them to live according to biblical doctrines and be the beacon of hope and restoration.
She commended the BSN for its efforts at expanding the gospel of Christ in the country through the distribution copies of the Bible especially in Yoruba, Hausa, Igbo and other major local languages.
In his remark, BSN Grand Patron and former Head of State, General Yakubu Gowon (rtd), commended philanthropists and governments for their donations and provision of logistics for the mass production and circulation of the Bible.
He urged Nigerians not to be discouraged because of the series of challenges confronting the nation now but remain steadfast and resolute to overcome, even as he charged Nigerians to continue to work for the unity and peace of the country through prayers, words and action.
The former military leader expressed optimism that Nigeria would overcome all its woes and emerge stronger and more united as a nation.