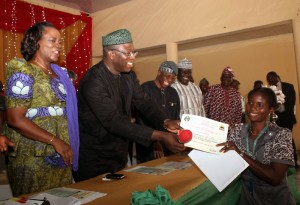 Teachers in Ekiti State have faulted attempts by some politicians to make cheap political points from the educational policies of the state government, saying that they trust that the efforts of the Dr Kayode Fayemi administration are geared towards repositioning the state’s education sector.

The teachers made this position known in Ado Ekiti on Thursday at the closing ceremony of the 2013 Cluster Schools Model for Teacher Professional Development Training Programme, held at Ola Oluwa Muslim Grammar School. The State Chairman of the Nigerian Union of Teachers (NUT), Comrade Kayode Akosile, said the rumour making the rounds that Fayemi hates teachers and intends to sack a large number of them after re-election is peddled by political gladiators in the opposition parties in order to cause disaffection and use them to actualize their inordinate ambitions.

The NUT Chairman who urged politicians to steer clear of the relationship between Fayemi and teachers stressed that the warmth welcome given by the teachers when Fayemi arrived the venue of the training was a proof  that the Governor is on ground with the teachers who have tagged him “the real teachers’ governor”.

Akosile assured that teachers will never betray the Governor because he has consistently demonstrated commitment to their welfare, added that while many of their colleagues in some other States of the federation are yet to receive their December salaries, Ekiti teachers have received January salaries despite the paucity of funds.

“There have been insinuations that teachers don’t like you or that you don’t like teachers. I think today when you came in, the way the crowd welcomed you shows the true situation of things. I think the rumour making the round, without any apology, I will say is from the political gladiators. Let me say that as long as Fayemi remains the governor of EKiti State, Teachers will continue to give him support. You will continue to carry our loads, we will continue to bring our complaints to your door steps. I don’t think we have any apology for that because you are our governor. Despite all odds, the financial incapability, yesterday I, like many others, received my salary alerts”, Akosile said.

While thanking the Governor for attending the programme, the teachers’ leader commended government for organizing the training adding that for teachers to be relevant, there is need to continue to learn especially under “this type of unique cluster training”.

Earlier, Governor Fayemi had debunked rumours of potential sack of teachers after his re-election, saying that detractors were behind every attempt to paint government black and misinterpret its good intentions for the education sector.

Fayemi stated that government is always asking teachers to partake in capacity building programmes because of its belief in their ability to deliver positive results as evident in last year’s results of senior school certificate examination of Ekiti students.

The Governor who added that last year’s SSCE result is the best ever produced by the State in the last 10 years stated that his administration has every reason to be proud of the hardworking teachers.

“There is no reason we should not make teachers proud of their profession. if we are asking you to do capacity building training, it is because we believe in your ability to deliver. Last year’s result is the best we ever had in the last 10 years. It is the result of your work, not mine. Teachers in public schools are better, well remunerated than those in private school so why should students in public schools not be better than those in the private schools? The best students last year are from Ikere High School, Government Girls College, Iyin and Christ’s School, Ado Ekiti compared to what happened in previous years. You are the ones to help us  maintain this standard and achieve 100 percent”, the Governor asserted.

Fayemi however assured that government would provide better welfare packages for the teachers this year as incentives for their hard work.

The event was attended by the Deputy Governor who doubles as the Chairperson of the State Universal Basic Education Board, (SUBEB), Prof. Modupe Adelabu, the Commissioner for Education, Mr Kehinde Ojo, and Chairman of the State teaching Service Commission, Chief Bayo Adeniran among others.