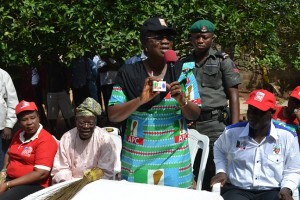 Members of the All Progressive Congress (APC) in Ekiti State and supporters of Governor Kayode Fayemi have been encouraged by Deputy Governor, Prof. Modupe Adelabu not to be intimated by the heavy presence of security operatives ahead of the governorship election billed for Saturday.

She gave the charge while addressing residents of Fiyinfoluwa Street, Isale Ori  Apapta, Off Adebayo Road, Ado who gathered to express their solidarity and support for reelection bid of governor Fayemi – the flag-bearer of the APC.

“The security operatives at the polling units are there to protect you and your votes. So don’t be afraid to come out and cast your vote for Governor Kayode Fayemi on Saturday to enable him to continue the good work,” the deputy governor told a crowd of party supporters.

According to her, the operatives have been mandated to protect lives and guard the ballot boxes give them adequate security and ensure that them from being vandalized or stolen by anti-democratic forces.

Besides, the deputy governor said the operatives have been deployed in the state trouble-shoot and deal with law breakers.
She described as a welcome development, the appreciation extended by spokesmen of the community of the landmarks of the Fayemi-led administration since it assumed office more than three years ago and for their determination to ensure that governor Fayemi emerged the winner and return to office for a second term.
Mrs. Adelabu urged party faithful to conduct themselves peacefully as they go out to vote on the election day even as he advised to them wait patiently till the end of the poll for the results of the ballot.
Assuring them of the completion of all the ongoing projects in their domain, the deputy governor advised them to subject the food items being distributed by desperate politicians to laboratory tests to determine the integrity of such foodstuff before consumption.
She also told youths not to yield themselves as will tools in the hands of the do-or-die politicians to cause violence and perpeterate electoral fraud.
The deputy governor reminded them that if they die in the process, they would become a loss to their parents and family and not to any politician.
Speaking, the Chairman of the Landlord and Residents Association in the area, Dr. Ayodele Joseph noted that the community has partaken in democratic dividends under the Fayemi-administration through the implementation of electrification and road projects.
He said the speed at which the government respond to the people’s request has endeared it to the heart of the people, assuring that residents will reciprocate by voting massively for the governor.
Dr. Ayodele listed the interlocked road project, the replacement of the faulty transformer servicing the area and the renovation of the only school in the area as some of the landmarks of the administration in the area.
Also speaking, the Youth Leader, Mr. Ojo Taiwo lauded the government for empowering the youths and for several other programmes that have been put in place to secure a better future for them.
He said the youths, being elightened who cannot be deceived by desperate politicians, know that a vote for Fayemi is a vote that will guarantee a better Ekiti for all.