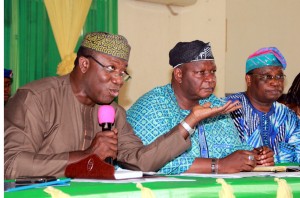 The Governor of Ekiti State, Dr Kayode Fayemi has told workers in the State to ignore rumours making the rounds and being circulated through text messages and the social media that he is planning to sack workers and cancel payment of leave bonus on re-election.

The Governor gave the advice in Ado Ekiti at the weekend during a quarterly interactive forum held with civil servants in the State.

Governor  Fayemi said the masterminds of the text messages often take Ekiti people as fools who could be tossed around by lies and baseless claims; describing them as enemies of Ekiti progress.

The Governor said it is ridiculous that some could peddle lies that government is planning to cancel leave bonus which is part of the emolument of the workers as well as retrench workers.

He stressed that no worker has been sent parking since his government came on board except those who have retired or ghost workers.

Fayemi added that government would not have responded to the rumours because this is a season of lies as the State is approaching electioneering period but decided to set the record straight so that the unsuspecting citizens wont buy into the lies.

“Even within the civil service, they found the sms ridiculous and having puerile claims but this is the season of lies, and you should expect as many lies as possible. I get these lies myself on my phone.

“Some have decided that they have no other way to conduct themselves in this electioneering period than to engage in bear face lies. Frankly some of the lies are not worthy of response from government because we will like to think that Ekiti people are intelligent enough and are not as gullible as these enemies of progress want them to appear”.

“There is nothing farther from the truth than for anyone to claim that government wants to abolish leave bonus. Leave bonus is part of the conditions of employment, part of the salary package. It is not just the monthly salary, it is also your ability to obtain car loan to take housing loan and leave bonus and benefit from other benefits that are associated with the job that government offers you. This is similar to claims that we are going to retrench workers. This is a government that has not retrenched one worker since we came into office in 2010 unless you have committed an offence or you have reached your retirement age, not a single worker has been sacked in this State’, he said.

Governor Fayemi while stressing that government would continue to bring succour to the workforce, asserted that Ekiti State is one of the few States that are not owing workers despite the reduction in federal allocation since August last year.

The Governor agreed to increase funds for car and housing loans for the workers and assured that the construction of perimeter fencing of the state secretariat would be done to ensure adequate protection of government property.

Some of the workers who spoke at the forum thanked Fayemi for addressing some of the issues raised at the last forum held last year; saying that he is indeed a promise keeper.

One Mrs Bunmi Afolabi of the Hospitals Management Board and Miss Dupe Ajimati who had last year asked the Governor for prosthesis and a wheel chair respectively thanked Fayemi for granting their requests; saying that the gesture has given them a new lease of life.

Issues ranging from study leave approval, increment in both housing and car loans, Payment of 2014 leave bonus, rural allowance to the nonteaching staff among others were raised by the workers, calling on the governor to address them without any further delay.