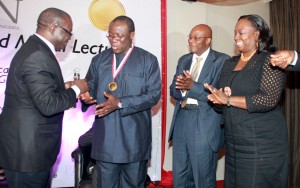 Ekiti State Governor, Dr Kayode Fayemi has traced the challenge of governance in post-authoritarian Nigeria to the deficit of trust between the state and the citizenry.

Dr. Fayemi stressed that it is not an exaggeration that Nigerians nurse a profound scepticism about the intentions of their political leaders and about the capacity of institutions to deliver on the promise of democracy, adding that the prevalent notion is that “politicians come into office to simply line their pockets”.

He added that this view can be traced back to the era of military rule during the 1980s and 1990s when the Military dictators who seized power typically did so while announcing their patriotic credentials as incorruptible soldiers who had come to save the country from imminent chaos while also appealing to national sentiments of populist critiques of politicians as corrupt elites who had despoiled the commonwealth and led the country towards conflict with their ceaseless bickering.

While explaining that the widespread distrust is perhaps the most understated crisis of the nation’s young democracy, Fayemi said this holds adverse implications for democracy.
“Cynicism leads inevitably to apathy. If people cease to believe in their elected leadership, they will also shortly lose interest in public affairs. Democracies are never more vulnerable to hijack or collapse than when citizens lose interest in the activities of political leaders and cease to hold them accountable.

“If people are generally disbelieving of what their political leaders are saying, it follows that they will shortly become disinterested in what they are doing. And as their emotional and intellectual investment in the democratic process wanes, they give room for anti-democratic forces to take advantage of the vacuum and seize the public square”, he explained.
The Governor stressed that no government can successfully conceive and execute policy in a climate of distrust as communication remains key to building trust between the government and the society.

The Ekiti State Governor also called on government at various levels to always endeavour to communicate their plans and policies to the people and treat them as critical stakeholders in the success of such policies. Citing different inst ances where effective communications of policy direction by his administration had led to the success of such policies and where poor communication had led to the rejection of some policies, he said it is important for government to sharpen its communications skills and also make use of experts in the field.

He added that public opinion and public confidence serve as the lifeblood of healthy democratic governance while it is the task of political elites to take the pulse of the public, and develop the instincts and aspirations of the electorate into a political and public policy agenda.
Using Ekiti as an example, the Governor said his administration had sought to bring the participatory ethos of consultation and consensus to bear upon governance by organizing frequent town hall meetings to give account of stewardship while also getting their input into the budgetary process in the State.

Fayemi said: “As part of my administration’s extensive policy communications strategies, we also have some of the most vibrant online media platforms. Our official website www.ekitistate.gov.ng has been adjudged the most visited state government website and one of the most visited public sector websites in Nigeria. We also frequently publish milestone accountability materials in which our achievements are clearly stated to be assessed by all and sundry. The foregoing accounts for the phenomenal success we have been achieving in developing our state”.

The Governor added that for policies to work, the development goals have to be generated by citizens and tally with their own needs and aspirations so that they can take ownership of the programmes and see to their successful execution.
He stressed that many Nigerians cannot take ownership of policies, even those which are manifestly beneficial to them, because they are alienated from the policy making process.

Earlier in his welcome address, the President of the Association, Mr Chido Nwakanma had submitted that part of the problem with the nation’s democracy is the lack of application of public relations to governance, hence the disconnect between citizens and the government.
Nwakanma added that democracy is a consultative governance process that involves identifying, aggregating and implementing programmes that meet the needs of the citizenry.
“As Nigeria walks towards another transition and change of government, PRCAN calls on actors in the political process to be more circumspect and professional in their communication. These times call for careful deployment of language. We should not just to be heard but to communicate higher values that enrich, inform and persuade other parties to our points of view and contribute to national cohesion”, he said.