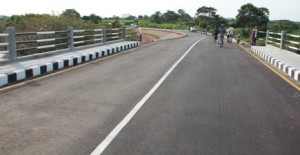 The essence of politics according to Plato, one of the greatest philosophers of our time, is service to the people. Creation of egalitarian society and eradication of poverty remains the cardinal objective of politics. By all intent and purpose, Dr Kayode Fayemi, the governor of Ekiti State is a student of this school of thought. By the same taken, the hallmark of democracy in this contemporary, world is hinged on good governance, accountability transparency in all facets of national life, as well as the delivery of the dividend of democracy to all. This remains the guiding principle and propelling force of the present administration in Ekiti State since it came into being in October 2010, when the will of Ekiti people was overwhelmingly vindicated with the inauguration of the present governor.

Since then Ekiti State has witnessed myriads of unprecedented developmental strides. A peep into the last three eventful years of this purposeful and focused administration, will reveal clearly, an unequal dexterity and tenacity of Fayemi in the Ekiti project, consistent with the dream and the aspiration of our founding fathers – that is, taking Ekiti Sate to an enviable height as well as making it a model among its peers now and beyond 2014.

These giant strides are evident and includes, the rolling out and execution of laudable programmes/projects which are meant to touch the lives of all Ekiti citizens; construction and rehabilitations of new and existing roads network spread across the state, youths and women empowerment to reduce poverty among the vulnerable group; urban renewal programmes; refurbishing and reconstruction of public schools to facilitate conducive teaching and learning; re-awakening and re-vitalization of the virtue of integrity and hard work which hitherto has been our cherished value just to mention but a few.

The vigour and unfettered commitment of the governor to the dualisation of roads and beautification of Ado metropolis thereby giving the city the status of a state capital deserves the commendation of all well-meaning citizens of the state. All these stands out as clear manifestation of the desire of the administration to turn around the fortune of the state as well as the importance it attached to leaving Ekiti State better than it met it.

Given the monumental works that still require attention, coupled with the energy the present administration is exerting to fast track developmental, it is only logical to deduce that the motivating factor that propelled the governor – a great son of Ekiti into partisan politics were not for personal aggrandizement, rather it was in fulfilment of his life-long zeal of dedicating his life to the enthronement of genuine democracy and improvement of the life of the ordinary man on the street. The patriotic, visionary and focused leadership that has engendered political and economic transformation of Ekiti in the last three years is unequal and unparalleled. Fayemi’s strive to build a foundation for lasting democracy and sustainable development devoid of temporary show of excitement by over-articulate section of the elite and it’s captive audience remains unquestionable going by his antecedents over the years both in public and private life.

As a goal getter and going by his impeccable records of achievement since he came to the seat of power in 2010, this man of honour has left no one in doubt that he is a believer in the virtue of integrity, transparency, anti-corruption and good governance. His belief in the emancipation of the active poor from poverty/lack is unprecedented. Fayemi’s actions/ programmes are all printers to his commitment to turning the fortune of state around for the good of all Ekiti both to home and in Diaspora.

The time to wave aside political partisanship and to rally round the purposeful administration of Fayemi is now. Ekiti has suffered for too long in the hands of people who get to power for selfish agenda rather than common good of the majority. The economic retrogression, political rascality and the lingering state of insecurity with its attendant ills cannot be allowed to continue to ravage our hope of a state where everything works hence the need for all well-meaning Ekiti sons and daughters irrespective of political leaning, to come together and give this administration a pat on the back so as to spur them for more positive action to take Ekiti State to the next level.

Fayemi, an outspoken collaborator in the nation’s democratic struggle that span over a decade is ever ready to help restore that light and hope which Ekitiland epitomize in Yorubaland and Nigeria.

In one encounter with Fayemi prior to his becoming the governor, he said that he would want to live the rest of his life for history by means of beneficent and selfish service to humanity in general and to Ekiti people in particular. This he has clearly demonstrated ever since he mounted the saddle of leadership in Ekiti. A leading light who has always been in the fore front of fighting for restoration of human dignity, social justice and sustainable development of Ekiti on one hand and Nigeria on the other, he remains our collective hope for brighter future and a prosperous state. Ekiti people’s resolve to jettison primordial party sentiment by rallying round and giving his administration’s unwavering support will in no small measure and in a very speedy manner, help in the attainment of the lofty goals put in place by Fayemi and his team. With his astute leadership endowment, amiability and general acceptability, the sky is the beginning of restoration of hope for all Ekitis in all facets of life.

For sure, a bright future is at the doorstep of all Ekiti sons and daughters as the present administration promises to continue to roll out more developmental strides that will stand the test of time and better the lot of all and sundry.

This article was first published in The Nation on Monday, 30th December 2013