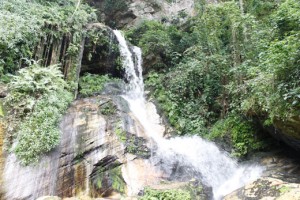 If you love eating fresh fish, especially catfish, the robust ones in Omi (River) Erin in Erinjiyan-Ekiti, Ekiti State, will no doubt appeal to you. They swim freely unmolested; and you may be tempted to kill some of them. But, you dare not!

These catfishes are believed to be sacred and killing any of them, it is said, could incur the wrath of the gods and the traditionalists.In fact, it is believed that the catfishes are so sacred you can’t succeed in cooking them into edible morsel.

It is a taboo for anyone to kill the fish or even attempt to take it away out of the riverside. For this reason, the fish have multiplied and don’t run away from people who come there to fetch water.

In view of this, the river, Omi Erin, has become a sort of tourist centre as people come from different parts of Nigeria to see the sacred fish. Whenever they come like that they will buy loaves of bread, which they tear into pieces and throw into the river to feed the fishes.

The amusement derived from such visit is what led a communications agency to include the Eja Omi Erin as one of the tourist’s centres to be featured in the coming Ekiti Nature Trail scheduled for April 18-20, 2014. Its managing director, Dr Richie Adewusi, said there are many places in the state where nature has displayed its splendour.

Apart from the Eja Omi-Erin, which may even be described as the least patronised among the eco-tourism sites in Ekiti because infrastructure has not been put in place there, there are other places which Adewusi said would turn Ekiti to Jerusalem of sort if fully developed to international standards.

The Ikogosi Warm Spring is the only place perhaps in the entire world where warm and cold water springs meet. It has been developed to an international standard where a lot of facilities which make it a tourism destination of choice to local and foreign visitors. Adewusi said over 20,000 tourists visit the Ikogosi Warm Spring monthly and over 12,000 tourists visit the site during festive period.

The healing Oni River
A trip down to Efon Alaaye, in Efon Local Government, will also give you an opportunity to see the Oni River. This river is believed to have therapeutic powers which make people throng the place to bath and get healed. Some fetch the water to drink for healing and deliverance from every form of satanic bondage. Others even pour the water inside bottle or keg and send to their children or loved ones living in Lagos and overseas.

Unlike the Omi Erin River, which is always brown, the Oni River is always clean and transparent, you will see all the small fishes inside it. Apart from the instructions that people should keep it clean and not urinate in it, there is no taboo attached to it, because the source of its power is God and no traditionalist or idol worshippers has a say there.

Going by the words of Pastor Rufus Babatunde Adetayo, who is in charge of the Sepulchre of the late Apostle Joseph Ayo Babalola, when the apostle was alive, he had prayed on the river and set it aside for healing and miracles. Adewusi confirmed this that people even take sands from the river and pour inside bottle and fill it with water to get the healing they want. Adetayo told SWM that people suffering from stroke bathed in the river and received their miracles.

Government is considering turning the place to a religious tourist centre. Adewusi noted that because of the need to develop the place to increase the number of people visiting the place, government may have to put some infrastructure in place. He said the state government may introduce tickets to generate income from the place since the water cannot be sold: “With such income, money will be regularly generated to repair roads leading to the place, while the church, CAC, will continue to administer the place.” He added that the place could be likened to River Jordan and other places which pilgrims go to in Israel.

Arinta Waterfalls
Another tourism destination of choice in Ekiti is the Arinta Waterfalls, lpole-Iloro-Ekiti, Ekiti West Local Government area. The place is with long steep valley, rolling ridges, tall trees in the rain forest, melodious songs from birds in the forest, including a mass of water gushing out from the top of the rocks, and flowing down speedily in recurring order.

The site provides visitors with refreshing touch of nature. You feel relieved from the hustling and bustling of the city. Visitors savor the splendor of the waterfalls from the road leading to the falls from Ipole-Iloro. From the slope, one can see the wonder of nature as fresh water rushes along the rocky channel. It takes less than four minutes to walk to the foot of Arinta Waterfalls.

Ekiti Nature Trails
Adewusi said the Ekiti Nature Trails in collaboration with the Ikogosi Warm Spring Resort, is aimed at showcasing the various eco-tourism sites in the state. He said several programmes have been packaged to showcase the Ekiti’s natural endowments during the Easter period. He added that the best among the competitors, which will be drawn locally and from outside the State, would win a cash price of N450,000, with others going home with consolation prizes.

Adewusi who commended Fayemi for his commitment to tourism, described it as a veritable alternative to petroleum: “Having this kind of programme will not only’ promote tourism, but would improve our health and general wellbeing. Over reliance on oil proceeds from the Federal Government has made many states lazy. They don’t want to look inward and develop the local economy. I believe that the new initiative will promote recreation, commerce, wellness and resort in Ekiti with increasing volume of people in the state.”

The managing director of the Ikogosi Warm Spring, Mr Tolu Ajeyomi, said the resort receives an average of20,000 tourists monthly due to heavy investment on the site of the warm and cold spring by Governor Kayode Fayemi.

This article was first published in The Daily Sun onThursday, March 27, 2014.