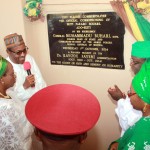 Former Head of State, General Muhammadu Buhari on Wednesday, led  other prominent Ekiti citizens in commissioning the 12,000-seater State Pavilion built by the Dr. Kayode Fayemi administration, with a call on Nigerians to ensure that only leaders with clear vision are allowed to lead at all levels.

The Ekiti Parapo Square adjudged to be larger than the Eagles Square Abuja was undertaken through the N20 Bond taken by the State Government.

Speaking at the event which also featured the nation’s 54th independence and 18th anniversary of the creation of Ekiti State, Governor Fayemi reiterated the need for all and sundry to embrace peace, saying that economic and academic endeavours can only thrive in an  atmosphere of peace and tranquillity.

The Governor who was hailed by a large crowd of citizens while inspecting the military and para-military parade asserted that the State has witnessed peace and accelerated physical development in his four years in office.

This, he said, was attested by the World Bank’s ‘Doing Business’ index which puts Ekiti as one of the four Nigerian States that have made “the most progress and stood out for introducing several high impact reforms that narrowed down the gap to best practices the most”.

Fayemi further stressed the need for all Ekiti indigenes to unite and take ownership of the Ekiti project so that the State can continue to have a “pool of achievers worthy of the State, National and Global recognition.”

“I therefore charge the good people of Ekiti State to push the bounds of possibilities for our future by uniting more than ever before to protect our heritage of honour as well as the modest developmental gains we have made in recent years. We must celebrate today by joining our hearts and minds in one accord, and decide to outgrow the teething challenges of statehood such as the arbitrariness we have witnessed in recent times”, the Governor said.

While speaking on the State Merit Award, the Governor said the award was aimed at restoring the values for which Ekiti people are known as well as redeeming “the meaning of who our heroes are”.

Governor Fayemi, who stated that it is incontrovertible that Ekiti is the home of intellectuals, said Olaoluwa’s feat as Africa’s youngest Ph.D holder in Mathematics at the age of 24 years will challenge the younger generation of Ekiti indigenes to brace up with “avowed determination to surpass the academic excellence already displayed by Olaoluwa.”

Also speaking, General Buhari who inaugurated the Ekiti Parapo Square expressed amazement at the feats recorded by the Fayemi-led government; saying that he was proud to be associated with the Governor whose government has pioneered many rare achievements.

He attributed the feat achieved by the administration to the visionary leadership provided by Governor Fayemi and urged Nigerians to always look out for visionary leaders to entrust with the mandate to lead.

Buhari noted that the State has really proved itself as an intellectually endowed State under Fayemi as exhibited in the roll call of the recipients of the 2014 merit awards.

Gen Buhari said: “I am proud to be associated with the success stories by the governor of this State. I am extremely impressed by the performance of individual Ekiti indigenes especially in the intellectual field. This is very rare in Nigeria. This is a very intellectually endowed state. I am also very impressed by this edifice that I have been asked to commission. I thank the Governor very much for associating me with his success story”.

At the event were the former Governor of the State, Engr. Segun Oni, Wife of the Governor, Erelu Bisi Fayemi, the State Deputy Governor, Prof. Modupe Adelabu,  Prof. Sola Adeyeye, and heads of security outfits  in the State, among others.