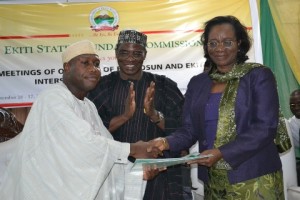 Ekiti State Deputy Governor Prof Modupe Adelabu (left) and the representative of her Kwara counterpart, Kwara State Commissioner for Local Government, Chieftaincy Affairs and Community Development, Alhaji Isa Adamu Bawa exchanging copies of the communique at the end of meeting. With them is the the Director-General of the NBC, Dr. Muhammad Bose Ahmad... in Ado-Ekiti

A two-day joint meeting of government officials and affected communities organized by the National Boundary Commission (NBC) on Ekiti/Osun and Ekiti/Kwara in Ado-Ekiti ended yesterday with all parties agreeing to co-exist peacefully and abide by the decision jointly reached at the end of the meeting.

In her opening remark, Prof Adelabu recalled the past actions on the Ekiti/Kwara interstate boundary and the sectors in dispute.

She stressed that boundary disputes, which are creation of people can be amicably resolved by recourse to history and available documents, reiterating the need for peace to reign in order to allow for meaningful development.

Prof Adelabu commended the efforts of the NBC and the patience of the affected border communities and assured all stakeholders that the administration of Governor Kayode Fayemi is committed to resolving all boundary-related issues involving the state and the promotion of peaceful co-existence among the communities of both states.

Also speaking, the Kwara State deputy governor, represented by Alhaji Bawa, noted that the two states have many things in common notwithstanding the few sectors of the boundary in dispute.

He called on stakeholders to take urgent steps towards resolving the few outstanding grey areas so as to ensure lasting peace among the border communities and commended the role of the NBC towards defining the boundary.

Dr. Ahmad, in his own remark, noted that from the address of both states, the two states are united in the common desire and commitment to make further progress on the boundary demarcation in a peaceful manner.

The NBC chief admonished youths in the affected border areas to take up the challenges of ensuring the peaceful co-existence while urging other stakeholders to intensify discussions on ways of ensuring that the boundaries do not constitute barriers but bridges of contact opportunities.

Presenting the report of the technical committee, Mr. Bashir Shattima, NBC Director, Internal Boundaries, reported that the boundary which is defined by the Legal Notice 126 of 1954 was traced physically on the ground and that the states while agreeing substantially with the Legal Notice, showed different claims in some sectors.

After a careful consideration of the report of the technical committee and those presented by the Surveyor-General of Ekiti and Kwara states, the meeting resolved among others the following:

·          that the NBC and office of the Surveyor General of the Federation shall produce a digitized map of the Ekiti/Kwara interstate boundary in accordance with the provisions of the Legal Notice 126 of 1954 by the end of November, 2013.

It was also resolved that the government of the two states shall maintain the status quo and respect individual holdings that may be affected by the boundary line between the two states as defined by the Legal Notice 126 of 1954.