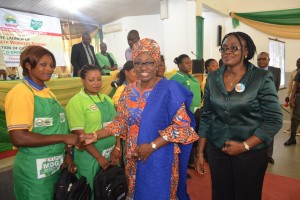 Wife of Ekiti State Governor, Erelu Bisi Fayemi, has said that the impactful populist programmes and policies of the Dr. Kayode Fayemi-led administration will aid the re-election bid of the governor in the June 21 governorship election.

She was also optimistic that the country would be a better place for all citizens if the state’s model of “good governance, transparency and clarity of vision” were replicated at every level of governance.

Erelu Fayemi said this at the launch of Village Health Workers Scheme and presentation of cheques to Agriculture-based cooperative societies, organized by the state’s Millennium Development Goals office, in Ado-Ekiti, on Monday.

The first lady said that the Fayemi-led administration had a wide range of people-oriented achievements to flaunt, which she said was a marked difference between him and his predecessors.

“The edge we have over other people is that we have a long range of achievements to point at within the last three-and-a-half years of this administration.

Erelu Fayemi asserted that millions of people in the state have benefitted from the good governance of the administration and would wish it continues for another four years.

She advised beneficiaries of the scheme to be good ambassadors of the state, while she also urged them to do their best to support the poor and the needy in their various communities.

The governor’s wife implored them to do their best to reduce maternal and infant mortality to the barest minimum to build on the record achievements of the state in this regard.

She said “We are very pleased that at least in Ekiti state, through good governance and purposeful leadership, we have been able to ensure that the 2.5million people we have responsibility for are adequately taken care of.

“We have the highest life expectancy among our elderly because of the Social Security Scheme. We have the lowest maternal mortality because of what we have been able to do for our pregnant mothers and under five children.

“We also have the lowest Mother-to-Child-Transmission of HIV/AIDS because of all the efforts we are putting in place. This goes to show that if our models of good governance, transparency and clarity of vision were to be replicated across the country, Nigeria will be a better place than it is today.”

Erelu Fayemi reminded the gathering that the Conditional Cash Transfer scheme launched last year had been able to assist 2250 women, who are either single parents or widows, to sustain their livelihoods.

The governor’s wife used the opportunity to canvass support for women in the farmsteads and urged the MDG office and other stakeholders to consider the rural women for subsequent empowerment schemes in order to give them a sense of belonging.

The Special Adviser to the Governor on MDGs and Development Relations, Mrs. Bunmi Dipo-Salami commended the governor for his passion for the welfare of the people.

She emphasized that the 8-point agenda of the Fayemi-led administration was part of the strategies aimed at ensuring that pregnant women and children under five were well taken care of.

Dipo-Salami added that the Village Health Workers scheme was in furtherance of the administration’s efforts aimed at improving the health status of the people.

According to her, the village health workers will serve as interface between pregnant women and health facilities by ensuring that expectant mothers seek regular medical attention.

She stated further that the MDG’s support for the agriculture-based cooperative societies was aimed at reducing poverty and to create job opportunities for the people of the state.