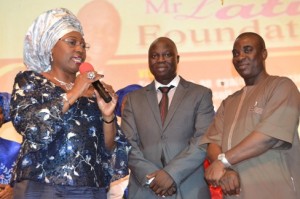 Wife of Ekiti State Governor, Erelu Bisi Fayemi, has appealed to South-West governors to rally behind the indigenous movie industry to promote the Yoruba culture and economy.

She made the call in Abeokuta, Ogun State capital, while receiving an award as a ‘Distinguish Icon of Hope’ from the Mr. Latin Foundation, founded by popular Yoruba actor, Mr. Bolaji Amusan, a.k.a. Mr. Latin.

The maiden edition of the award held at the Olusegun Obasanjo Presidential Library, also witnessed a lecture, ‘Role of celebrities in nation building,’ delivered by the Publisher of City People magazine, Dr. Seye Kehinde.

Erelu Bisi Fayemi was optimistic that the movie was capable of becoming a major revenue earner for the region if well harnessed and given the talents that abound in the industry.

She encouraged theatre artistes to produce films that dwell on the strength and potential of Africa women, as well as traditional practices and social malaise limiting their accomplishments.

The First Lady promised that Ekiti state government would continue to support any worthy course aimed at emancipating women and children in the country.

She said, “For a long time, I have been a scholar of popular culture. I have followed very keenly the development of theatre and indigenous film industry in Nigeria, particularly in the South-West.

“That is why I’m surprised to hear that they are celebrating 20 years of Nollywood. I don’t know the one they are talking about, because the Yoruba theatre industry is well over 20 years old.

“I want to call on state governments in the South-West to support the industry, because it is capable of becoming a major income earner, apart from promoting the indigenous culture.”

Speaking at the occasion, Amusan said that the recipients of the awards were chosen by the board members following their contributions to women and youth empowerment and nation building.

He said the foundation was poised to unlock the potential of the less privileged, particularly youths and widows.

The popular actor said that he would use the platform of the theatre to enlighten the general public on issues relating to health, child abuse, prostitution and other ills rampant in the society.

In his remarks, Ogun state Governor, Senator Ibikunle Amosun, said he was proud to be associated with the foundation and promised to ensure that it outlived the founder.

Amosun, who was represented by the State Commissioner for Arts, Culture and Tourism, Mrs Yewande Amusan, commended the founder for giving back to the populace.