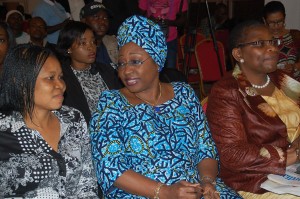 L-R: President, Women Arise for Change Initiative, Dr. Joe Okei-Odumakin; Erelu Bisi Fayemi; and a former Minister of Education, Dr. Oby Ezekwesili, at a forum convened by WACI to protest against Senate resolution in support of child marriage, in Lagos.

Wife of Ekiti State Governor, Erelu Bisi Fayemi, has joined eminent Nigerians and groups to frown on the Senate resolution in support of child marriage in the country.

She spoke at a stakeholders’ forum convened by the President, Women Arise for Change Initiative, Dr. Joe Okei-Odumakin, in Lagos. A former Minister of Education, Dr. Oby Ezekwesili; and Mrs. Funmi Falana, also attended the meeting.

Erelu Bisi Fayemi called on the Senate to revisit the issue and ensure that they came up with a Constitution that would accord dignity and respect to women and the girl child. The governor’s wife canvassed the deletion of section 29 (4) (b) of the constitution, which stipulates that any woman who is married shall be deemed to be of full age.

She lamented the position of Senator Ahmed Yerima and other senators that supported the retention of the vexatious sub-section on religion ground. According to her, perverts should not hide under the guise of religion, culture and tradition to deny women and girls of their rights as exemplified by child marriage.

Erelu Fayemi called on the National and States Assembly to ensure that all international and regional agreements relating to the rights of the child were domesticated without further delay.

She emphasized the need for stakeholders to come out in full force and joined the ongoing campaign aimed at eliminating child marriage from the statute book.

Erelu Bisi Fayemi said, “We are gathered here today to talk about the girl child and the implication of this amendment. But it is also about the rights of women who are the mothers of those female children who would eventually become women.

“Take action and seek accountability, which can bring an end to the culture of impunity so that the rights of women and girls will not continue to be treated with such levity in Nigeria.”

The First Lady wondered why Nigeria, a signatory to various local, international and regional agreements such as 1979 Convention for the Elimination of Discrimination Against Women (CEDAW) and 1989 Convention on the Rights of the Child could embark on demeaning steps targeted at the girl child.

She added that Nigeria is also a signatory to Women Protocol to the African Charter of Women and People’s Rights, which explicitly put minimum age of marriage at 18 years, among other treaties that forbid child marriage.

While lamenting the spate of sexual assault on girls and women, the governor’s wife urged the National Assembly to pass the pending bill on Violence Against Persons. She urged members of the Senate not to carve out their own personal laws to suit their own personal circumstances or cover their “private sins.”

Erelu Fayemi however, commended the resolve of the Senate President to plead with the members of the Gender and Constitution Committee to revisit the issue, given the uproar that the proposed amendment had generated.

Former Minister of Education, Dr Oby Ezekwesili, said the protest against under-age marriage was geared towards the protection of the girl child. According to her, children should be given every opportunity to put them in a state of mental, physical and psychological readiness to be able to make certain informed decision in life.

Ezekwesili also noted that religion could not be the only reason for the senate to legalize child marriage, stressing that a girl child should be emotionally ready to be a mother.

The convener, Dr. Joe Okei-Odumakin described the Senate decision as obnoxious, adding that it was aimed at ruining the future of the girl-child. Odumakin stressed the need to continue to protect the Nigerian child against every form of abuse, warning the country against allowing religion to divide her.

A communiqué issued at the end of the meeting reads:

“That we unequivocally demand the deletion of section 29 (4) (b) of the 1999 Constitution as originally proposed by the Senate Committee on Constitution Review;

“That State Houses of Assembly that are yet to domesticate the Child Rights Acts should do so immediately;

“That the Violence Against Persons Bill pending before the National Assembly and the Gender Equal Opportunity bill before the State Houses of Assembly should be passed without further delay;

“That all known violators of the Child Rights Act and Laws in all the states of the federation must be prosecuted to serve as deterrence to others.”