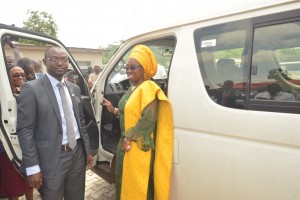 Wife of Ekiti State Governor, Erelu Bisi Fayemi, is pained that the country is losing some of its best brains to cancer due to late presentation, wrong diagnosis or denial.

She said this when she donated an 18-seater bus to the Funmi Olayinka Diagnostic and Wellness Centre, Ado-Ekiti, to mark her 51st birthday, on Wednesday.

Earlier in the day, a holy communion and thanksgiving service was held at the Government House Chapel, Ado-Ekiti, in commemoration of the occasion.

The service was attended by the Governor, Dr. Kayode Fayemi; his Deputy, Prof. Modupe Adelabu; Speaker of the State House of Assembly, Dr. Adewale Omirin, among top officials of the state.

Presenting the bus, the first lady restated the need for women to go for early screening for cancer at any standard health facility, describing the disease as a scourge that afflicts the rich and the poor.

Since the former Deputy Governor of the state, Mrs. Funmilayo Olayinka, whom she described as her confidant and sister, died of breast cancer, she said she had stepped up her awareness and education on the scourge across the state.

She said, “Cancer is not a respecter of people, or age or what you have attained in life. As a matter of fact, what I have learnt is that you might have all the resources in the world but if this sickness gets hold of you, it is only God who can save you.

“The country is losing its best brains to cancer due to late presentation for screening, wrong diagnosis or denial. This is why we have to continue to raise awareness and educate our people on this deadly disease.”

Instead of blaming imaginary enemies for cancer affliction, she said proper and timely diagnosis of the disease would mitigate its deadly effect and save the country of avoidable death of its citizens.

Thanking God for adding one year to her age, Fayemi promised to continue to use every platform and opportunity to serve the people and ensure a better life for the people of the state, especially women.

She said that her desire to ensure that grassroots women were mobilized to the centre for screening without being confronted with transportation challenges informed the donation of the bus.

The governor’s wife pledged not to waver in her support for the centre towards ensuring that cancer-related deaths were reduced to its barest minimum in the state.

Fayemi said, “I am very glad to be part of the establishment of the Funmi Olayinka Diagnostic Centre because I was not only devastated regarding her passing away, I was even more devastated by the circumstances under which she died.

“I then made a promise to myself that I will do everything within my power to ensure that I raise awareness and sensitise people on the need for them to try and prevent any form of cancer.

“We know that health or wellbeing is in the hands of God Almighty, but we should focus on anything that may take us away from our relations and stop us from doing what we love doing.”