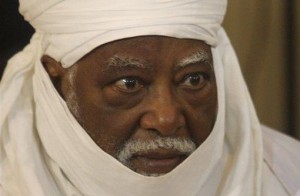 Ekiti State Governor, Dr. Kayode Fayemi, has described the death of the Emir of Kano, Alhaji Ado Bayero, as a monumental loss to Nigeria.

The Governor in a statement by his Chief Press Secretary, Mr. Yinka Oyebode, also described Bayero’s demise as the end of an era of one of the longest and most prosperous reign in the history of the traditional institution in Nigeria.

According to Fayemi, the late Bayero presided over an emirate that became a rallying point for all Nigerians irrespective of their ethnic, cultural, linguistic and religious backgrounds.

The Governor also described the late emir as a father to all from whom political leaders drew inspiration, counsel and mentoring.

Governor Fayemi noted that the death of the Kano monarch has left a big vacuum in the promotion of peace, nation building, conflict resolution and national unity.

He stressed that  the late Bayero’s life exemplified service as a prince, community leader, police officer, diplomat and traditional ruler of repute.

Dr. Fayemi prayed God to grant  the people of Kano and the immediate family of the late Emir the fortitude to bear the great loss, urging them to be consoled that the late emir lived a good life and touched lives positively.