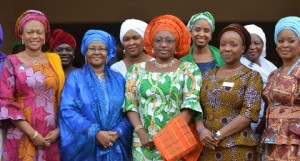 National women leaders of the All Progressives Congress converged on the party’s headquarters, in Abuja, on Monday, towards mobilizing women for the forthcoming party’s registration, as well as general elections.

Also at the meeting were the Interim National Women Leader of the APC, Mrs. Sharon Ikeazor; Senator Oluremi Tinubu; a member of the House of Representatives, Mrs. Abike Dabiri-Erewa, among other APC women in parliament; governors’ wives; female deputy governors and national women leaders.

Welcoming participants to the meeting, the national women leader said that the meeting was crucial for the women leaders to exchange ideas on the best way to mobilise and sensitise women to participate actively in the party’s activities and elections at the states and national levels.

She stressed that women economic empowerment was germane to gaining access and opportunities to realize their political ambitions.

Ikeazor said APC women’s cooperative society and young women’s forum would soon be inaugurated to assist grassroots women to gain financial strength and capability to assume decision-making positions within and outside politics.

She added that the party would organize effective training programmes for women at all levels to build their capacities across all spheres of life.

Ikeazor said, “As you are aware, economic empowerment is a key factor in the political success of women.

“Women must bring equal economic strength to the table if we are to gain the kind of access and opportunity we need to make our political dreams a reality.

“As we work to build a better future for our country, we must ensure that our work and progress live after us. One of the most powerful ways we can do this is by training a strong calibre of young women to take over from us.”

In separate interviews, Fayemi and Tinubu said the meeting was a strategic move towards rallying support for the APC in its quest to become the party to beat during elections at the local governments, states and federal levels.

The Ekiti First Lady said that the meeting was part of the strategies to build a formidable structure for Nigeria women as well as to position the APC as the party that would bring the needed change to the country if voted to power.

She charged women to use their numerical strength to effect positive change by voting the APC to power in the 2015 presidential election.

She said efforts were being made towards ensuring that women, who, according to her, constitute 50 per cent of the country’s population, received their dues in terms of empowerment and other welfare packages.

Starting with the Ekiti and Osun States governorship election scheduled for the middle of this year, the governor’s wife solicited total support of Nigerians for the APC during every election.

Fayemi said, “It is very important for us to meet, because we need to build a formidable structure for Nigerian women who are members of our party.

“We need to reassure them that women, who happen to constitute 50 per cent of the population of this country, will get what is their due under an APC administration.”

Senator Oluremi Tinubu commended the interim women leader for conveying the meeting and urged women to put aside all manners of bickering and rivalry and unite to enable them to contribute to the leadership change the country craves.

She urged women to mentor younger ones on the need for selflessness, adding that women should henceforth speak with one voice to enable them to achieve greater heights in the political space of the nation.