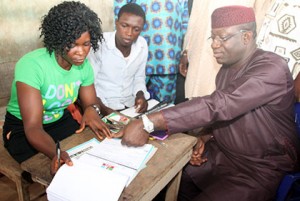 As Nigeria’s leading opposition party, the All Progressives Congress (APC) continues the registration of its members across the country, Ekiti State Governor, Dr Kayode Fayemi has described as immaterial the refusal of the Senate President, David Mark to read the letter of 11 former PDP Senators  informing the Senate of their defection to the APC.

The Governor who participated in the registration exercise at Ogilolo, Isan ward 11 in his country home, Isan Ekiti on Thursday said that the failure of the Senate leadership to read the defection letter has not changed the Senators’ decision to dump PDP, adding that they have already registered as members of APC in their various states.

Governor Fayemi who opined that the defection of politicians from one party to another is not new in Nigeria, asserted that the ruling PDP is jittery over the loss of its members.

He added that politics is an evolutionary process and more of such defections from the ruling party to the main opposition will be witnessed both in Ekiti State and other parts of the country.

“The refusal has absolutely no effect. I know that the Senate President will ultimately do the right thing. You cannot abort a baby that has been born. The defection is a statement of fact. All these senators already attend APC meetings, they are actively involved in our activities. I saw some of them actually registering in their States.

So whether the President of the Senate chooses to accept that they have lost them to APC or not is immaterial. This will always happen. Some have crossed from APC to PDP before so there is nothing new in what’s happening. It is just that the ruling party is not used to the idea of losing those they consider to be their members and politics is an evolutionary process”, he submitted.

While speaking on the registration exercise in Ekiti State, the Governor expressed optimism that the APC would have registered no fewer than 500,000 members in Ekiti State before the conclusion of the exercise next week.

Fayemi described the exercise as a precursor of the INEC processes and the June 21 gubernatorial election in the State.

The Governor who was accompanied by some party leaders was hailed by his kinsmen who expressed unflinching support for his re-election.