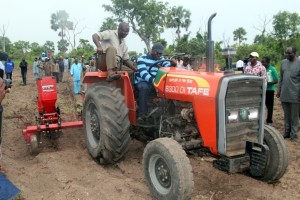 Expressing a clear plan for the agricultural sector on October 16, 2010, the Governor Kayode Fayemi-led administration pledged “reviving cocoa plantations to make Ekiti State again a world leader in cocoa production; agriculture to contribute 50 per cent of internally generated revenue; 20,000 Ekiti youths trained and employed in mechanised and employed in mechanised agriculture by 2014.”

A critical evaluation of the agricultural sector has revealed that though a long way still remains to be covered, the government has gone far in implementing far-reaching agricultural policies capable of making the state a food basket of the country in the nearest future.

Through its facilitation of agricultural land acquisition, privatisation of abandoned government facilities, forestry investments, supportive backbone infrastructure and tax breaks for agribusiness investors, the Ekiti State government has set up a sustainable platform for agricultural revolution and investments in the state and specifically, the following have attracted commendations from stakeholders.

Youth Commercial Agriculture Development (YCAD)
The realisattion that the older generation of farmers could not be an effective tool to turn agriculture around without the involvement of technology-compliant and financial literate graduates made the government to establish the Youth Commercial Agriculture Development (YCAD), which has so far employed over 250 youths in crop, animal production and processing. The youth were selected from over 1500 applicants, trained, and empowered with millions of naira to practice poultry and fishery production, cassava production and processing, as well as cocoa and palm production. The YCAD-rice Expansion Programme cultivated over 1,000 hectares in 2013 and with a plan for 3,000 hectares dry season rice production.

Inputs supply to farmers
The government has so far distributed agriculture equipment worth N57 million to rice farmers in the state and paid counterpart funds for NERICA rice worth N17.6 million, the National Programme on Food Security (NPFS) worth N40 million, FADAMA III project worth N60 million, the Root and Tuber Expansion Programme counterpart fund worth N42 million. It is also on record that it has cultivated and supplied 500,000 cocoa seedlings and 60,000 oil palm seedlings to farmers at highly subsidised rates.

It was also revealed the government purchased 12 tractors valued at N72 million to support FADAMA III Project; provided micro-credit facilities to farmers worth N35 million at N150,000 per farmer. This was disbursed to peasant farmers in 177 wards in the state at zero interest rate. It has also distributed 143,781 bags of fertiliser to farmers across the state.

Partnerships
Realising it cannot achieve its target of food security without the help of individuals and corporate bodies, the government has partnered to resuscitate Ikun Dairy Farm in collaboration with Friesland Campina WAMCO Nig Plc; embarked on the upgrading of Forest Governance in partnership with the European Union and the Food and Agriculture Organisation (FAO) and established high cassava flour processing factory with the introduction of mobile processing units across the state through Dutch Agricultural Development and Training Company (DADTCO), with state government holding 15 per cent equity.

Under a private public partnership arrangement with Vegefresh, it refurbished a cassava processing plant and successfully upgraded the plant from 10 to 60 t0nnes per day production, and it secured a commitment from Buffer Farms to invest over $6 million in setting up 1,000-hectare cassava plantation at Oke-Ako in the state.

It is also a fact that the government fostered collaboration between British America Tobacco Nigeria Foundation and FADAMA III project on the construction of a $1 million worth of cassava cottage industry to create jobs for 2,250 women and 1,200 unemployed youths across the state.

Agricultural Infrastructure
The government renovated poultry pens in three hubs across the state for production of over 100,000 broilers and 40,000 layers in cycles under the YCAD-livestock production; raised over 40,000 fish stock in 2012, and over 100,000 fish stock raised in 2013 under the YCAD-aquaculture programme; rehabilitated the 6.5 km Osin Farm Settlement-Ijelu  road; commenced rural and farm infrastructure development at Iyemero agriculture growth corridor; established 2,100 hectares irrigation scheme on Itapaji and Ero Dam; acquired 10,000 hectares of agricultural land at Oke-Ako, Iyemero and, Irele between January and March 2012, and the beneficiaries were NCE and polytechnic graduates. Also, it acquired 2,024 hectares of land for development of irrigated agriculture at Iyemero and it established 22 hectares out of a targeted 25 hectares of oil palm plantation at Ode-Ekiti.

Governor Fayemi said in one of the agricultural forums that: “As you are aware, agriculture had been tagged the next frontier for economic development in Nigeria and Africa. A lot of moves and discussions are focused on harnessing potentials in Africa towards developing commercial agriculture, yet, poverty persists. As for us in Ekiti State, Food Security is the first line of defense and attack to make poverty history. Therefore, all stakeholders must take the development of the agricultural sector seriously. This is the only way to guarantee the future of our great nation, Nigeria, beyond oil.”

This article was first published in The Nigerian Tribune on May 27, 2014.