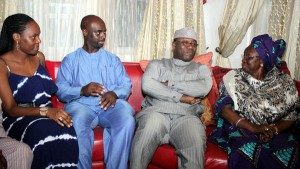 Ekiti State Governor, Dr Kayode Fayemi has condoled with the family of the late former Governor of Ondo State, Dr Olusegun Agagu; saying that the former Governor who passed on last Friday was an exemplary leader who would be greatly missed.

Governor Fayemi who was received at the Ibadan home of the late Governor by his widow, Olufunke and two of his children, Feyi and Solape, described the late Agagu as an advisor, mentor and a committed political leader who operated in a manner that was above board.

The Governor added that the deceased was not a political bigot as he lived above pettiness, rancour, and the usual acrimony that was pervasive in the nation’s political system.

“He was an advisor, a mentor, a committed political leader and operated in a manner that was above board, he was above pettiness, above rancor, above the usual acrimony that was pervasive. In all of this, he did it with grace, civility and panache, compassion and commitment to the people of Ondo state of which we were once a part in Ekiti. Many might say he belonged to the other side but for Agagu, there was no other side. There was no enemy in politics. He was a quintessential gentleman”, Fayemi said.

While asserting that Agagu was supportive of the Fayemi-led administration in Ekiti, the Governor explained that he conceived the 8-point agenda which has received encomium from far and wide from Agagu’s plan while running for office in 2003, and how he organized his government when he eventually emerged Governor.
He added that he read the late Governor’s plans and what he was to achieve at intervals.

Fayemi said the deceased was a different breed from other politicians perhaps because of his antecedents in the academic world; saying that he was an “intellectual giant who left that comfortable world of academics to get to the mucky waters of politics” in order to compassionately serve the people of his State.

The Governor however charged people who see the late Governor as a true leader to play politics in an above board manner, and a corruption free manner.

“In all my opportunities to discuss life, politics and academics with him, he always had something to teach me at every point in time and for me, there was another dimension to the loss. He was the intellectual giant who left that comfortable world of academics to get to the mucky waters of politics. He was a pioneer in the field, he was one of the very early generation of politicians from the academic world. Maybe that was why he was different. For him, it was about the work.

I read his plan before he became governor, he knew what he was going to do in 6 months, 12 months, there was an 18 months plan, 24 months plan and that guided me when I was running for office in Ekiti. That’s where a lot of what people now associate with us in the 8 point agenda came from. I learned a great deal from the way he organized government, the lean manner, the focus on people rather than on politicians. He was a kindred spirit in many ways and we shall sorely miss him”, Fayemi said.