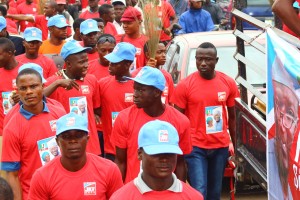 Members of the Modupe Adelabu Support Group staging a solidarity rally in Ado-Ekiti.

The mainly-youth group said the rally was part of its contributions towards the reelection of Governor Kayode Fayemi at the election scheduled for June 21.
Taking off at the Odo-Ado Junction, the participants, who listed the achievement of the Fayemi-administration in songs, also chanted the slogan of the John Kayode Fayemi (JKF) Campaign Organisation.
They walked through Ijigbo,, Old Garage, Okeyinmi and Dallimore with security and traffic officers guiding them.
The entourage of the governor ran into the procession on their way to Fajuyi Park before they returned to Okesha and Ojumoshe en-route the take-off point.
Their coordinator, Prince Diran Aladesanmi described the three-hour solidarity rally as tip of the iceberg, promising that the group has lined up a number of programmes to ensure Fayemi’s re-election.
According to him, the administration has done enough to return it to office for a fresh mandate.
“There is no point in changing a winning team. We need continuity in Ekiti State. Fayemi has put us on the path of progress and we must all vote for the All Progress Congress (APC) for the good work to move on,” Prince Aladesanmi said.