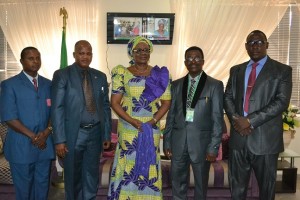 With the governorship election in Ekiti State fast approaching, clerics in the state have been charged to be more fervent in their prayers for continual peace and a violence-free election.
Ekiti state Deputy Governor, Prof. Modupe  Adelabu gave the charge while hosting ministers from the Gospel Faith Mission International (GOFAMINT), Ekiti State Region in her office in Ado-Ekiti.

Prof. Adelabu noted that the peace that pervades the state and the unprecedented developments witnessed in the three years administration of the Governor Kayode Fayemi is an evidence of God’s backing for his government.

She therefore urged all lovers of Ekiti not to relent in their prayers for the governor in his effort to fulfill God’s call upon him to take Ekiti to the next level of development.
Earlier, the Ekiti State Regional Pastor of GOFAMINT, Pastor Mathew Ojuolape congratulated the deputy governor on her appointment and lauded governor Fayemi for serving the state with the fear of God and the love of Ekiti people at heart.

The cleric, who explained that God places people in positions of authority for a particular purpose, enjoined leaders to find out God’s purpose for them in a position and endeavor to fulfill it.

Pastor Ojuolape also advised the government to raise a team of men of God who will continually intercede for the government and the state in prayers before God so that peace will continue to reign in the state, particularly during the coming election.