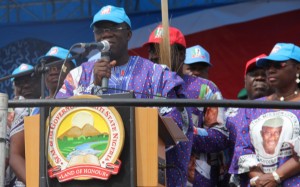 In this piece, our correspondent, KAMARUDEEN OGUNDELE, reviews the re-election rally and public presentation of Governor Kayode Fayemi to Ekiti electorate by the leadership of the party

“We have eschewed the vulgar extravagance and flamboyance associated with power and opted instead for simplicity and sensitivity to the demands and needs of those who put us here.” These were the words of Governor Kayode Fayemi when he was officially presented to the public by leaders of the All Progressives Congress in Ado-Ekiti. The interim National Chairman of the party, Chief Bisi Akande, Maj-Gen. Muhammadu Buhari (retd.), national leader of the party, Asiwaju Bola Tinubu, were present at the event.

Commiserating with families of the victims of Jos bombing last Tuesday, the interim National Publicity Sectary of the APC, Alhaji Lai Mohammed, announced that the occasion will be deprived of its planned fanfare. A minute silence was observed in honour of the victims of the blast which occurred at a Jos market in Plateau State where no fewer than 150 people reportedly died. Speaker after speaker poured encomiums on Fayemi for turning around the fortunes of the state through his education policy, health scheme, welfare package for the elderly, women and the vulnerable, and other developmental agenda.

The governor, who is referred to as ‘oko arugbo’ (old women’s husband) in recognition of his care for the elderly, used the occasion to unfold his manifesto tagged “Roadmap to Rapid Economic Growth and Development” which is known as the Ekiti Agenda. Fayemi said although the state had witnessed a massive change in the last three and a half years, he was motivated to present himself for re-election because of the need to build a society where all Ekiti people will be partakers of a collective prosperity. The APC candidate stressed that he had kept faith with Ekiti values as the people of the state had kept faith with him. He said he went into politics because he believed that committed purpose-driven servant-leadership can provide people with the tools that will empower them and give them control over their own destinies.

Leading the pack, Akande and Buhari commended Fayemi whom they said had demonstrated the capability of a good leader through his landmark achievements in Ekiti State.

Tinubu described the Peoples Democratic Party as poverty development party and he urged the people of the state to vote for Fayemi and protect their votes.

He said, “On the morning of election, you have nothing to fear. Don’t be afraid, go there, demand your rights, you will not have this (opportunity) again until another four years. This is the opportunity to show your happiness and the rejection of the poverty development party. The election day is not a tea party. You have to be ready; I always say this: power is not served a la carte.”

A former political rival of Fayemi and the immediate past governor of the state, Segun Oni, who recently defected from the PDP, said the opposition party made a grave error in presenting Fayose as its candidate for the June 21, 2014 governorship election.

He said, “We are not here to enthrone mediocrity but to ensure that the people have a government that our children will benefit from and will be proud of. Anybody who I cannot point to as role model for my own children or for the good children of Ekiti, I will never endorse.” He urged the people to vote for Fayemi and avoid a return to the days of “poultry project.”

Oshiomhole and Aregbesola urged the people of Ekiti to troop out on election day and vote for Fayemi. Aregbesola appealed to the Independent National Electoral Commission to use card reader during the Ekiti and Osun governorship elections in order to prevent the use of fake permanent voter cards by election fraudsters. Accusing the PDP of cloning permanent voter cards, Aregbesola said the commission has a duty to conduct a free and fair election in both Ekiti and Osun states. He said, “These people (PDP) are busy cloning voter cards and the cloning cannot be detected by physical examination, only the card reader can so do. For the transparency and credibility of the elections in Ekiti and Osun and subsequent elections, the electronic card must be used.”

Governor of Imo State and Chairman of the APC Governors Forum, Rochas Okorocha, who said the party initially considered canceling the rally because of the Jos incident, added that “When the wicked is in power, people mourn and cry. When the righteous is in power, people rejoice. The people of Ekiti are rejoicing because a good man is in power.”

But the Ayo Fayose Campaign Organisation denied the allegations against the former governor and governorship candidate of the party, describing them as a tissue of lies. AFCO criticised the education policies of the Fayemi administration, saying it was wrong of the government to merge the three universities owned by the state into one.

Specifically, AFCO described the scrapping of University of Science and Technology, Ifaki-Ekiti and the University of Education, Ikere-Ekiti, as a disservice to Ekiti people. Speaking through its Director-General, Chief Dipo Anisulowo, AFCO accused the governor of denying Ekiti youths admission opportunities by merging the universities.

According to AFCO, the admission slots for the state indigenes has reduced by two-thirds and also affected the state government’s access to Federal Government’s education intervention funds through agencies like Tertiary Education Trust Fund.

But the Kayode Fayemi Campaign Organisation boasted that the government’s education policy had transformed the state to a place of pride. In a statement by its spokesperson, Dimeji Daniels, the KFCO claimed that the education programmes of Fayemi’s administration were responsible for the increase in the success rate of the state in the Senior Secondary Certificate Examination from 22 percent in 2010 to 70 percent in 2013. The group said the state also won the 2013 edition of the national essay-writing competition by the All Nigeria Confederation of Principals of Secondary Schools, and the annual National Mathematics competition organised by the National Mathematics Association of Nigeria, among others. KFCO said, “The seriousness exhibited by the Fayemi administration in the sector was why it was able to attract the attention of the international community through a grant of $50m from the World Bank to restore education to its enviable heights in the state.”

AFCO also accused the governor of deceiving teachers by promising them 27.5 per cent salary increase when the election is approaching. Describing it as “deceit of the century,” Anisulowo said, “Ekiti teachers cannot be fooled by a government that took them for granted for over three years.”

The criticism, however, came at a time the teachers in Ekiti State under the aegis of the Nigeria Union of Teachers and Academic Staff Union of Secondary Schools have expressed support to the governor in the June 21 governorship election. The teachers, in two different letters, thanked the governor for his welfare package for them, adding that Fayemi’s performance in the state was unparalleled. In a May 2, 2014, letter, which was co-signed by the state’s chairman of ASUSS, Mr. Sola Adigun, and the Secretary, Mr. Omolayo Oso, the teachers commended Fayemi for the recent promotion of senior principals, who had “reached the bar on grade level 16 but had the bar lifted by the governor so that principals can also retire on grade level 17 as applicable in the civil service.”

The union, while acknowledging Fayemi as a true progressive and welfare-oriented governor, said “never in the history of Ekiti has any principal reached this enviable grade level.” The NUT, in its letter signed by the state’s chairman, Mr. Kayode Akosile, and its secretary, Mr. Ola Idris, said the donation of an 18-seater Toyota Hiace bus by the governor to the union was a demonstration of his commitment to improve the welfare of teachers in the state. The union expressed optimism that other promises made by Fayemi would begin to manifest soon. The University of Lagos Alumni Association has also backed Fayemi for victory at the forthcoming polls to enable him continue his “service to humanity in Ekiti State.” In a letter signed by the National President of the Association, Dr. Sonny Kuku, the association said its members were not surprised by Fayemi’s laudable achievements in the state because his “unique ability in management would always endear him to stand out as an administrator par excellence.”