Three indigenes of Ekiti State were at the weekend honored, alongside others, with the Presidential Award for National Youth Corps members that demonstrate exceptional qualities during their national service.

The trio Ayodele Olubusayo Abidemi, B.Sc (ED) Biology Education from Ahmadu Bello University Zaria; Kolawole Toba Gabriel, a graduate of Medicine from the University of Ilorin and Seriki Adetutu Ifeoluwa, graduate of Computer Science from Moshood Abiola Polytechnic, were part of the 110 that received the Presidential award at a colorful ceremony in Abuja.

President Mohammadu Buhari offered scholarship and automatic employment to all the awardees for their exemplary service and commitment to their fatherland.

The awardees were selected by the National Selection Committee, comprising eminent Nigerians, which screened nominees from the 36 states and FCT.

Director –General of the National Youth Service Corps, Brigadier-General Shuaibu Ibrahim while speaking at the ceremony said, traditionally, those recommended for national awards were those that have won a category of awards at the State level. 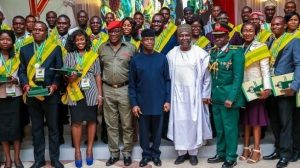