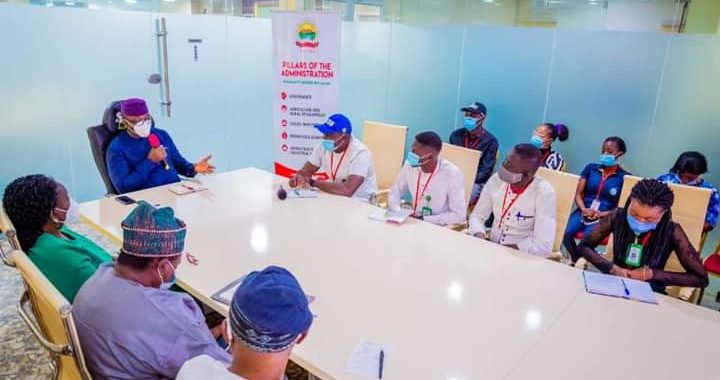 The Governor of EKITI State, Dr Kayode Fayemi, has assured Nigerians that an end was in sight for the insecurity being experienced in the country, especially kidnapping of students in some states.

Dr Fayemi, who is also the Chairman of the Nigeria Governors’ Forum (NGF) said the Forum was already working collaboratively with the Federal Government and all security agencies to stem the tide of insecurity nationwide.

The Governor disclosed this in Ado-Ekiti on Tuesday when he received in audience executive members of Federation of Ekiti State Students’ Union (FESSU), the National Female Students’ Association of Nigeria as well as students’ union leaders of higher institutions in the state.

Dr Fayemi, during the marathon meeting, reiterated his administration’s commitment at ensuring that anybody found culpable in criminal tendencies are brought to book, adding that no room would be allowed for impunity of any kind in the country.

He used the opportunity to warn students and youths to shun all forms of criminal tendencies, adding that it was heartbreaking to find students arrested for kidnapping fellow students in order to get ransom.

The Governor disclosed that the NGF under his watch had visited some of the northern states of Zamfara, Kebbi and Kaduna where female students have been abducted and met with the governors to look at how the Forum can assist security institutions there to retrieve abducted students.

He explained further that it was the sole responsibility of the states to undertake the responsibility of security and welfare of the citizens not minding the limitations that governors do not control the security apparatus of their states even as Chief Security Officers in their respective states.

Speaking further, Dr Fayemi disclosed that as a result of the emergency declared by the governors last year, about 30 states of the federation have signed the Violence Against Persons Prohibition Act into law within the last ten months.

He added that his administration has encouraged other states and even universities to set up gender-based laws and anti-sexual harassment committees as well as sexual assault referral centres to look after victims of sexual assaults, harassment of whatever kind to stem the tide in that area.

The Governor promised to continue to form synergy and collaborate with students and students bodies to ensure their welfare and safety wherever they may found themselves in all parts of the country.

“It is a time all of us are concerned about the issue of insecurity and I must thank you for going beyond your immediate issue as students to raise the question that is agitating the minds of all Nigerians, security, particularly security of our girl child. I have had cause over the last month or two to visit Kankara, Jangebe in Zamfara and go to Kebbi where our female students have been abducted and meet with the governors, look at how we can also assist security institutions to retrieve these abducted children. Not to mention what has been happening particularly in Kaduna state over the last few months.

“Clearly, government has a lot to do to protect our citizens, the first responsibility we have in the constitution of Nigeria is the security and welfare of citizens. And if we are not able to achieve all of that, then, we would be said to be failing in our duty and since we don’t want to be seen as failures, I want to reassure you that as governors, we are working collaboratively with the federal government and our security institutions to really stem the tide of insecurity.

“At the Nigeria Governors’ Forum, we declared an emergency against gender-based violence from June 10, 2020, I directed all states to enact laws against gender-based violence and there is a whole range of it, sexual harassment, defilement of children and domestic violence. And at the time we declared that emergency, we had 14 states that had signed into law, the violence against persons prohibition act, today, we have 30 states, many in the northern part of Nigeria that had not signed it last year and have now signed it,” the governor said.

Earlier, the National President of Federation of Ekiti State Students Union (FESSU), Comrade Awolola Charles and the President of Female Students Association of Nigeria, Comrade Modupe Adetiba expressed their unreserved appreciation to Governor Fayemi in his effort at ensuring students are well positioned to achieve their hearts desire for greatness.

They also called on other states governors to emulate the stand of Ekiti state by domesticating the gender violence and sexual harassment policies of the state to leverage on the tide nationally.