The Ekiti State Government has renewed its commitment to giving the welfare of workers an utmost priority despite the dwindling resources occasioned by the challenges posed by the COVID-19 pandemic.

The Deputy Governor, Otunba Bisi Egbeyemi, disclosed this during a special outreach to workers organised by Ekiti State Women in Management (EKWIM) as part of activities marking this year’s Workers’ Day celebrations.

Assuring workers of the readiness of the Governor Fayemi administration’s commitment to their welfare, Chief Egbeyemi said government did not allow the economic challenges to stop it from giving a lift to their welfare and that of the retirees.

“This programme is very commendable; it is a good initiative and demonstration of selflessness and comradeship. It supports Governor Kayode Fayemi’s efforts at ensuring workers’ welfare and development.

“The state government despite the dwindling resources and the challenges posed by COVID-19 pandemic will continue to give the welfare of workers an utmost priority.

“This administration made it a duty to pay workers’ salaries and retirees’ pensions regularly. Two abandoned offices buildings were completed at the Secretariat for more office accommodation and ease of doing business.

“Also, government took career-advancing steps such as conversion and inter-cadre transfer for workers. A remedial programme is ongoing for junior officers at the Staff Development Centre, Ado Ekiti,” he said.

While noting that the administration values inputs of the workers to the socio-economic development of the state, Egbeyemi noted that achievements recorded by government would not have been possible without the support of the civil servants.

The Head of Service, Mrs. Peju Babafemi, said this year’s Workers’ Day theme: “COVID-19 Pandemic, Social and Economic Crisis: Challenges for Jobs, Social Protection and Welfare,” speaks to the prevailing situation in the country and other parts of the world.

She commended the Governor Fayemi administration for its demonstration of steadfast commitment to workers’ well-being through regular payment of salaries, capacity building, career enhancement programme and provision of environment conducive to work.

Mrs. Babafemi lauded the Governor and top officials of the administration for contributing funds with which the items were purchased for distribution to the benefiting workers including the watchmen guarding government ministries, department and agencies.

The Head of Service applauded EKWIM which was launched in March for the initiative urging the beneficiaries to continue to give their best in appreciation of the gesture.

Workers cutting across various Grade Levels including watchmen providing security at government offices went home with gifts items to mark the May Day.

Some of the largesse distributed at the event included bags of rice, vegetable oil, food materials and other household materials to appreciate them for their contribution to productivity in the state.

The materials distributed to the workers were purchased from funds donated to EKWIM for that purpose by personalities including the Governor, Dr. Kayode Fayemi; First Lady, Erelu Bisi Fayemi; the Deputy Governor, Otunba Egbeyemi; State Executive Council members and the leadership of the State Civil Service.

Other top government functionaries who attended the event included the Speaker of the House of Assembly, Rt. Hon. Funminiyi Afuye, represented by the Leader of Business, Hon. Gboyega Aribisogan; Chief of Staff to the Governor, Hon. Biodun Omoleye; Commissioner for Education, Dr. Bimpe Aderiye; Director General, Office of Transformation and Service Delivery (OTSD), Prof. Bolaji Aluko and others. 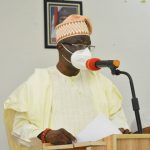 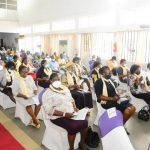 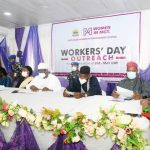 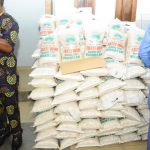