Governor of Ekiti State, Dr Kayode Fayemi has ordered the engineers in the State Ministry of Works and Transportation to work with the contractor handling Ilawe-Ado Ekiti road to carry out immediate geotechnical survey of the affected failed portion of the road.

Governor Fayemi gave the order when he visited the failed portion of the road in Ilawe Ekiti Wednesday afternoon, stressing that Government would work put a permanent solution to the road.

The Governor who was accompanied by the Commissioner for Local Government and Rural Development, Prof Adio Folayan; Commissioner for information and values Orientation, Barr Akin Omole; Director General Bureau of Public procurement, Mr O’Seun Odewale and other government officials, said the survey would provide the needed information on the depth of the effect of the spoiled portion on other asphalted parts of the road.

He explained that pending the outcome of the survey the existing alternative routes would be strengthened to accommodate the volume of traffic that would be directed to the areas while preliminary measure to get the road back to use would also be put in place.

The Governor who was received by the Monarch of the town, Alawe of Ilawe Ekiti, Oba Adebanji Alabi emphasized on the importance of the road to the state government and assured the people of the town that Government would handle the situation and ensure that the road is restored for all road users.

Dr Fayemi at the visit also stressed the need for people to take climate change seriously adding that the failed portion of the road was largely one of the effects of climate change.

“This is another evidence why we must take climate change very seriously when I heard of it this morning I even thought it was the other failed portion which we had already contracted out to the original contractor that was affected but it turned out that it is another part of the road that has now failed.

“This is a state road, we will take some preliminary measures to restore the road back to some reasonable use but we don’t want to be precipitated about our approach to dealing with this problem. We are going to get our engineers in the ministry of works, to work with the contractor, to do a geotechnical survey of the area affected. we will do a survey of at least 500 meters around this entire axis so that we know what is happening underneath the asphalted area in order to deal with it effectively.

“The important thing is pending the time this is being fixed alternative road will be made available via igede, toward Iyin for those who wants to get to Ado. It is a very important road to us in the state and that is understandable serving as alternative road for those who wants to get outside the state either towards Ilesha, Igbara odo, Igbara oke, Akure or those who want it as a short cut to other communities and farmland in this area not to mention Ilawe community itself that is going to be most affected by this unfortunate development.

“But I want to assure Kabyesi and all the people of Ilawe Ekiti that Government is not unaware of this that was why I came to check it myself and the contractor has already come I believe is bringing his extracavator and other equipment to start work immediately on this.” He said. 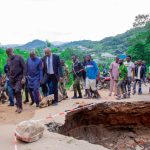 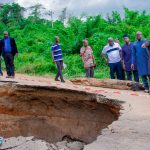 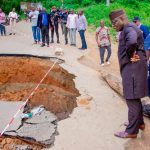 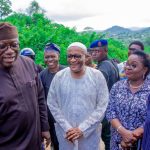