The Governor of Ekiti State, Dr Kayode Fayemi on Friday said machinery had been put in place by his administration to build additional three model schools to accommodate pupils in view of the recent return of some mission schools to their original owners.

The inauguration, which was witnessed by the Wife of the Governor, Erelu Bisi Fayemi; the deputy Governor, Otunba Bisi Egbeyemi; Speaker of the State House of Assembly, Funminiyi Afuye; Chairman traditional Council and Onisan of Isan Ekiti, Oba Gabriel Adejuwon; Ewi of Ado Ekiti. Oba Rufus Adejuyigbe, and top government functionaries, was the fourth model schools to be commissioned by the Fayemi within the last one year.

“The inauguration of this project today is yet another clear manifestation that our administration is fully committed to the ongoing transformation of the Education sector in Ekiti State and also completing all ongoing projects as we promised zero tolerance for abandoned projects.

“The project we are commissioning today is a one-storey 18 classrooms edifice with 42 toilets, chemistry, biology and physics laboratory, as well as ICT and Home Economics laboratories. Other facilities provided in the one-storey edifice include: a large examination hall, staffrooms, administrative offices, perimeter fencing, football pitch, basketball court, parking space and water treatment plant amongst others.” He added.

Governor Fayemi disclosed that the intended three model colleges would be located in Ikere, Odo-Oro and Ado Ekiti to provide access to Junior Secondary School (JSS) education to primary school pupils who hitherto would have attended the mission schools recently returned to their original owners in Ado Ekiti by the State Government.

He said government would still hand over more mission schools to their original once they meet the conditions set out by the government.

Speaking on the efforts his administration has put in place in the last 35 months to make school attractive and conducive for all school age children, Dr Fayemi identified the re-introduction of free education up to SSS3, abrogation of education tax, payment of matching grants of over N7.3 Billion to UBEC which covers the period 2015 to 2021; provision of instructional materials to schools; payment of running grants to all public primary and secondary schools in the State; massive rehabilitation of school infrastructure and construction of additional school buildings as part of government’s investments in education in the state.

Other initiative taken according to him, included the introduction of an aggressive training and retraining programmes under which over 15,000 teachers, school administrators and school support officers have been trained in the last three years, payment of teachers’ salaries as and when due, recruitment of over 1000 teachers and fostering greater synergy with development partners, the Universal Basic Education Commission and the Federal Ministry of Education amongst others.

Earlier, Chief Deji Fasuan, in his remarks recalled how in his early years as student in Christ School, he used to trek bush paths, risking attack by wild animals in an attempt to access education, glorified God who had made him to witness and benefit from the dramatic change that has taken place in the area.

He said the new model school would be of immense benefit to hundreds of parents and students who reside in areas spanning Oke-ila, Iso in Ado Ekiti to Afao and Are in Irepodun/Ifelodun local Government of the State.

Also the Commissioner for Education, Science and Technology, Dr ( Mrs) Olabimpe Aderiye commended Governor Fayemi for providing the necessary impetus to enhance compulsory and qualitative education for all school age children in a safe and conducive environment.

Dr Aderiye also commended the wife of the Governor, Erelu Bisi Fayemi for introducing anti-Gender Based Violence Club into all Ekiti schools to complements efforts to trash child and other gender related abuse in the State. 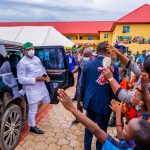 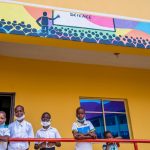 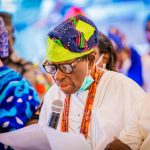 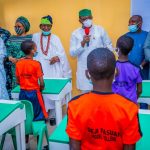 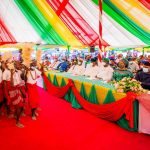 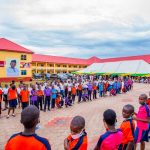 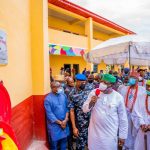 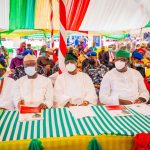 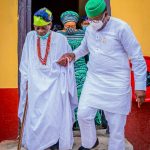