The Chinese Ambassador to Nigeria, Mr Cui Jianchun has assured Ekiti State Governor, Dr Kayode Fayemi of the readiness of the Chinese Government to partner with the state in the development of her knowledge Zone project and utilization of nuclear science and technology in developing critical sectors of the State.

The Chinese Ambassador gave the assurance on Tuesday when he led experts from China National Nuclear Corporation (CNNC) and other Chinese delegation on a courtesy visit to Governor Fayemi Ado- Ekiti.

Ambassador Jianchun, who was also accompanied by the Director General, Nigeria Atomic Energy Commission (NAEC), Professor Yusuf Ahmed, was in the state for a three day feasibility study of the Ekiti Knowledge Zone and how to apply nuclear technology in the development of agriculture, health, biotechnology, education and other critical sectors of the State.

He explained that Ekiti state’s partnership with China National Nuclear Corporation (CNNC) is a technological collaboration that would promote understanding on how to peacefully apply nuclear energy to serve the people of the State.

The Ambassador who had 23 years working experience with CNNC, said he was optimistic that the partnership with China in development of the Ekiti Knowledge Zone project would attract more supports from Chinese community not only in Nigeria but in other places.

He commended Governor Fayemi for providing the foresight and initiative in the development of the knowledge zone and assured that CNNC would provide the technological expertise in developing area.
In his remarks, Governor Fayemi explained that his administration was passionate about knowledge generation, knowledge development and knowledge transmission as well as wealth creation for the benefit of the people of the State.

The Governor added that the state also hold in high esteem its partnership with China, noting that Chinese companies had been very active in the execution of major infrastructural projects in the State.

Dr Fayemi expressed the readiness of the state to explore nuclear energy in the development of agriculture, education, health, biotechnology and whole range of other sectors to the advantage of the entire people of the State.

Fayemi said, “We are very passionate with our link with China. Chinese companies have been very active in our state and we have a number of our projects, including current projects that are being worked on by CCECC particularly we also have other projects being handled by TNJ in the State but we have a very good relationship with CCECC and to that extent you will see some of the projects when you go round.

“We are committed to this, we are passionate about it and I am sure that when we get into full discussion towards the next two days we are going to be able to explore the entire gamut of this efforts, agriculture, biotechnology, healthcare all of those areas that we believe can be of huge advantage to us, we are ready to go, we are very pleased that you are here and we know that this is the beginning of a segment of the continued partnership that we had with yourself and with our own team, NAEC from Abuja.”

Also the Director General of NAEC, Professor Yusuf Ahmed, revealed that China has about 60 percent stake in the entire funding of the project adding that his team had secured major requirements needed for the take-off of the execution of the project. 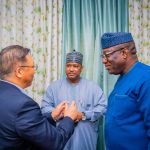 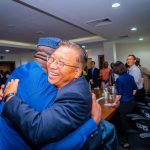 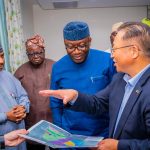