…as Monarch pledges to work for town’s elevation

The Governor of Ekiti State, Dr. Kayode Fayemi, on Monday presented the staff of office to the new Obaleo of Erinmope-Ekiti, Oba (Dr) Sunday Aikuirawo Aniyi, charging the new monarch to work with his subjects for the development of the town.

The Governor enjoined the university academic-turned traditional ruler to be accommodative, enduring, tolerant and diligent in his day-to-day administration of his domain while urging the subjects to rally round their king.

Performing the presentation of the staff of office and instrument of appointment to the new monarch, the Governor who was represented by his Deputy, Otunba Bisi Egbeyemi, also urged Oba Aniyi to be father to all.

The throne of the Obaleo of Erinmope Ekiti became vacant following the demise of the immediate past occupant, the late Oba James Olaifa Aina, who joined his ancestors on 22nd May, 2021.

The new Obaleo, Oba Aniyi, who was joined by his queen, Olori Omoyeni Aniyi, in receiving the instrument of appointment said destiny has thrust the onerous royal duties on him which he promised to discharge to the best of his ability and make the town proud.

Speaking before handing over the sceptre of authority to the new royal father, the Governor who said the selection process was devoid of political colouration and influence further reiterated his respect for the traditional institution given its roles in peace building and agents of grassroots development.

Governor Fayemi noted that the importance of the traditional institution informed the determination of his administration in ensuring the filling of the vacant royal stools in accordance with the extant rules and regulations to ensure that traditional rulers continue to play advisory and reconciliatory roles in their domains.

He said: “This position calls for considerable diligence, sacrifice, initiative and perseverance. You are to work in cooperation with your people to accelerate the development in Erinmope Ekiti.

“I am sure that with your antecedent and experience, it would not be difficult for you to foster unity among your people and transform your community to an enviable status.

“I also wish to appeal to the good people of Erinmope Ekiti to allow the spirit of oneness and sincerity of purpose to reflect in your support and cooperation with Kabiyesi. It is the basic requirement at this period when Erinmope Ekiti is in dire need of accelerated development.”

The Chairman, Moba Local Government, Hon. Bayo Aborisade, stressed that the process which produced Oba Aniyi as the Obaleo was just and fair even though it witnessed some challenges which was eventually overcome with the cooperation of the people and chiefs of Erinmope.

Hon. Aborisade who was represented by the Secretary to the Local Government, Mr. Moses Ariyo, also commended the state government for listening to all petitions from various ruling houses and appraising them fairly.

The Executive Secretary, Bureau of Chieftaincy Affairs, Mr. Adegboyega Morakinyo, said his agency put in the necessary machinery for the Iworo Aro Ruling House to fill the vacant stool on line with the Chieftaincy Declaration of the Obaleo of Erinmope Ekiti.

He explained that the State Executive Council approved the appointment of Oba Aniyi in September commending the kingmakers and the people of the town for maintaining peace during the time of the interregnum.

In his acceptance speech, Oba Aniyi appreciated the state government for making the historic event possible and allowing the selection process to go on seamlessly without any undue influence.

He commended Governor Fayemi for providing an environment that made the contest for the Obaleo royal stool competitive among the contestants and for upholding equity, fairness and justice throughout the selection process.

Oba Aniyi also singled out the Deputy Governor, Otunba Egbeyemi for commendation noting that he was the lawyer engaged by the community who successfully argued for the elevation of the Obaleo stool to Grade A status many years ago.

The monarch noted that he never knew fate would make his path cross with the Deputy Governor as the person to represent the Governor to present him with the staff of office as the new Obaleo.

The Obaleo thanked Erinmope sons and daughters for accepting him as their king and for the rousing reception he had received before, during and after the administration of traditional rites that were preparatory to his ascension.

Oba Aniyi said: “I want to thank Erinmope sons and daughters for their support and I accept my enthronement as the Obaleo as my destiny. I want to promise the people Erinmope Ekiti that I will serve them diligently on this great throne.

“I will serve you with all the power, strength, intellect and with everything God has given to me and I will make this community proud in all my actions and decisions during my reign as the Obaleo.” 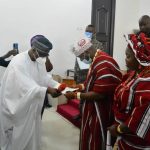 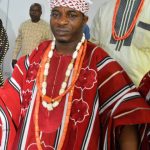 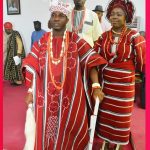 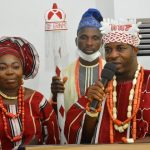 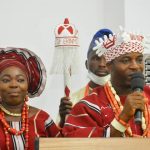 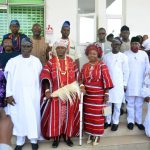 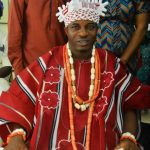 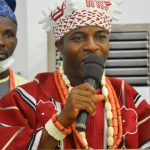 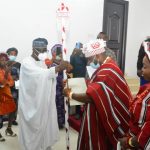 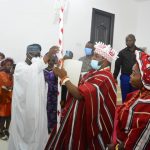