Governor of Ekiti State, Dr Kayode Fayemi has reassured members of Ekiti Council of Elders that their welfare will always be accorded too priority even as he concluded plans with them for the commissioning of the Elderly Citizens Resort Centre, in Ado Ekiti, the state capital .

Dr Fayemi, who gave the assurance on Tuesday while hosting members of Ekiti Council of Elders led by its Vice President, Chief Deji Fasuan in his office, said he was glad that the resort center was completed and would be commissioned by President Mohammadu Buhari by October.

He said he decided to build the resort as a payback for the elders who have spent the better parts of their lives serving the people both within and outside the state and for supporting his administration over the years.

The Governor, who commended some of the elders for their roles in the actualization of the creation of Ekiti State, reiterated his commitment towards ensuring that the construction of Ado-Akure becomes a reality, adding that he has also initiated negotiation with the NNPC to assist in the construction of the road.

He however added that his government has opened an alternative road from Ado-Ekiti through Ilawe to Akure and making efforts to finish and commission for use the Ado-Ekiti Airport before he lives office.

On security, Dr Fayemi used the opportunity to warn criminals and miscreants to steer clear of Ekiti state as the state already installed monitoring devices in several parts of the state, thereby leavng no hiding place for criminals.

Governor Fayemi said government was quietly going after criminal elements in the state, especially kidnappers, adding that a good number have been apprehended and would soon be charged to court.

“Let me thank my father for his very kind words on the efforts of the government in various aspects of development in the state. We would do our best and pass the baton to the next Governor to continue to do that which will be in the best interest of our people.

“I am also glad that we completed the elders resort center, there are still one or two things, we would definitely finish them before I live office, the road that you mentioned, we would do that, we would also equip the Centre. It is likely that the President is coming towards the end of the month or early October, he may commission the building. It is important that we do this because this is a monument to all the efforts of our elders in the council and all the supports we receive from you over the years and the interest you continue to show in the progress and development of Ekiti.

“We are not giving up on Ado-Akure road, before the end of the year, the new attempt we are making to get NNPC to help us with the road would come to fruition, but that is definitely one sour point that I am also not happy about and that we should do all to get it going. In the alternative, the positive is that the airport would be ready for use very soon.

“On security, it’s a major concern, we are doing quite a lot that the public may not be aware of, as a matter of fact we are making very many arrests of the people involved in kidnapping involving some of our own local people and the other elements from outside the state who perpetrate these horrific kidnapping in the state.”

Speaking further, Governor Fayemi said he was happy that he would be handling over to Mr. Biodun Abayomi Oyebanji, who had worked with the elders some years ago during the agitation for the state creation, and who he believes possesses the require knowledge about the state as well as the aspirations of the people, both young and old.

Chief Deji Fasuan commended Governor Fayemi on his performance as Chairman of the Nigeria Governors’ Forum and as the first Governor in the state that focused on projects abandoned by previous government and completed them especially the Secretariat complex which has become a beauty to behold.

Chief Fasuan also expressed the appreciation of Ekiti elders to the governor for taking the issue of security serious in the state and urged him to address the completion of Ado-Ifaki road as well as revisit the construction of Ado-Akure road with the federal government. 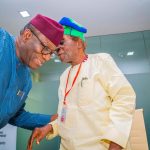 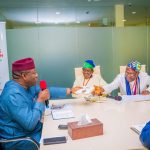 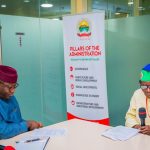