Speaking while performing the inauguration of the office which he described as a landmark project, the Governor who was represented by his Deputy, Otunba Bisi Egbeyemi, said digital inspection of vehicles will reduce automobile accidents on the state.

The Centre boasts of state-of-the-art facilities and has the capacity to inspect between 150 and 160 vehicles in a day.

With the commissioning of the Centre located at Adehun in Ado-Ekiti, Ekiti State now joins three other states in the federation that have gone digital in vehicle inspection process.

The Governor had earlier inspected a guard of honour mounted by the state Vehicle Inspection Officers (VIO) during a brief parade.

He noted that manual vehicle inspection also gave room to loopholes in the collection of revenue and impeded transparency and accountability.

Dr Fayemi said his administration has invested enormously in road and transportation sector with construction and reconstruction of roads across the three senatorial districts to make life easier for the motoring public.

The Governor said work has resumed on Ado-Ifaki Road while work is ongoing on the International Agro Cargo Airport which he said will put Ekiti on global economic map when completed.

Listing the gains to be made from the new digital Vehicle Inspection Office, Dr. Fayemi said: “This computerised vehicle inspection office which was a product of a Public Private Partnership arrangement has great advantages.

“These include digital compilation of records of all vehicles in Ekiti State, it will boost Internally Generated Revenue, easier determination of road worthiness of vehicles and drastic reduction of accidents on our roads.”

The Managing Director of Temple SYC Limited, the firm that handled the project, Prince Segun Obayendo, said the Fayemi Administration has bequeathed a worthy legacy to the people of Ekiti State to make access to vehicle inspection easier.

Prince Obayendo explained that vehicle inspection has gone digital and States in Nigeria should not take a back seat to ensure a seamless and result-oriented exercise.

The Commissioner for Works and Transportation, Mr. Sola Adebayo, explained that the Centre is equipped with machines, computers and digital equipment that can comprehensively carry out inspection with precision and give accurate report on conditions of such vehicles

He said: “When all the systems on the vehicle we drove are in worthy conditions, we can be rest assured that the statistics of road crashes due to mechanical factors will be drastically reduced if not eliminated. This will result in safety of lives.”

The Commissioner disclosed that the Governor has also introduced a system whereby Driver’s Licence Applicants will undergo a Driver Theory Test (DTT) where he will be asked both local and international questions on driving from the Highway Code to ensure familiarity with the contents.

The inauguration of the complex was attended by stakeholders in the transport sub-sector including officers of Federal Road Safety Corps, Ekiti Internal Revenue Service, Road Transport Employers Association of Nigeria, National Union of Road Transport Workers and the Nigeria Police. 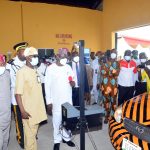 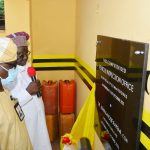 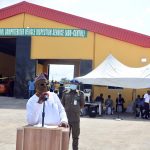 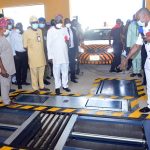 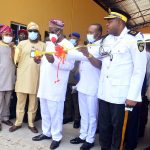 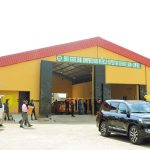 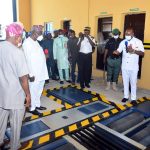 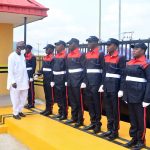