Governor of Ekiti State, Dr Kayode Fayemi on Tuesday commissioned an Independent Power Plant project at the Afe Babalola University, Ado Ekiti (ABUAD), with an assurance that the State Government would continue to support the institution’s initiative to achieve its visions of becoming a globally renowned institution.

Dr Fayemi who alongside the Osemowe of Ondo Kingdom, Oba Victor Kiladejo, former Governor of Ekiti State, Engr Segun Oni, Chairman Medical and Dental Council of Nigeria, Prof Abba Waziri, and other reputable individuals performed the foundation laying of nibe other projects at the ABUAD industrial Park, described the Founder of the institution as a man of endless possibilities.

The Governor explained that Aare Babalola’s intention of building a power plant project in the institution five years ago prompted his administration to commence the construction of a five megawatt power plant two years ago to address the electricity challenges confronting the people of the State.

He described the establishment of the IPP projects in the institution as revolutionary with the hope that more of such would spring up in the State to address the epileptic power supply in the State.

The Governor maintained that he was awed with the ABUAD Founder’s audacity of imagination and determination to succeed in achieving huge projects, adding that he has challenged and demonstrated a mindset of possibilities to those in leadership positions.

Governor Fayemi commended Aare Babalola for contributing immensely to government projects especially the airport project for which he had committed himself to constructing a terminal building. He noted that the airport project and the Ekiti knowledge zone are two major projects of his administration situated along ABUAD axis to inject more life into the environment.

“His Audacity of imagination and determination when he wants to accomplish the task. We have just gone round to either Commission or laid the foundation of nine projects. When we calculate what the projects will cost, it is possible dampen a man’s spirit if it is going to be possible.

“One of the things Baba has done so well is to challenge those of us in leadership, as I indicated earlier he spoke to me five years ago about the IPP project and we were also looking for how we can improve on the electricity challenge in the State, two years ago we started an independent power project for the State whose credit goes to baba on no uncertain ground because he was able to show that these things are doable it is no rocket science once you put your mind to it.”

Dr Fayemi who also laid the foundation of the bottle recycling factory at the ABUAD industrial plant, said the initiative was a thought for the future to address the imminent challenges of climatic changes.

Earlier in his speech the Pro Chancellor of the institution and former minister of Education, Prof Tunde Adeniran described Aare Babalola as an inimitable reference point in hard work, honesty, resourcefulness, philanthropy and has the capacity to turn impossibility to possibility. The Pro-chancellor also donated his library to the institution.

The colourful event also featured the presentation of one of the first class product of ABUAD who had been offered admission for a PhD programme in Oxford without going through LLM programme. 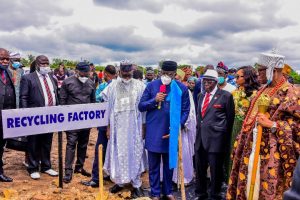