Governor of Ekiti State, Dr Kayode Fayemi has described the process of the ongoing governorship election in the state as seamless and time savings, with a pass mark on the Bimodal Voter Accreditation System, (BVAS) gadget deployed by INEC.

The Governor cast his vote at exactly 9.15am after he had been duly accredited.

Speaking with journalists shortly after casting his vote, Governor Fayemi said it was too early to make his assessment known. He however said he would give INEC a pass mark if the seamless process he experienced at his voting unit is sustained to the end of the voting process.

He commended voters at his unit for turning out early to exercise their franchise and for maintaining orderliness in the process.

“It is early days, I came in to vote early and I don’t want to pass a complete and final judgement but going by my own personal experience, at my polling unit, Ogilolo Iṣan Ekiti, it is a pretty smooth exercise, our people are calm, they all queued up to vote, the officers were dutiful and the BVAS worked and in my verification and accreditation exercise. if everything goes this way INEC would have been given a pass mark at the end of the day but as I said it is still very early, we can not pass a judgement about what INEC has done.”

Responding to the changes he noticed during the exercise, Dr Fayemi said the introduction of BVAS into the process proved to be effective in time saving and would increase turn out of voters during the election.

“Well, my PVC is still recognized and this is the PVC I have been using since the very beginning of this process here.

“One thing that has changed here is that the new process saves time. You know we used to come for accreditation between 8am and 12 noon, then go and come back to vote, but that process is now seamless, accreditation is done simultaneously with voting and I think that will save us time and probably increase turn out as well because the period spend by each voter has reduced if BVAS worked. I think that’s the only thing that has changed since our last election in 2018.” 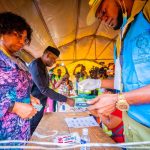 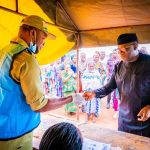