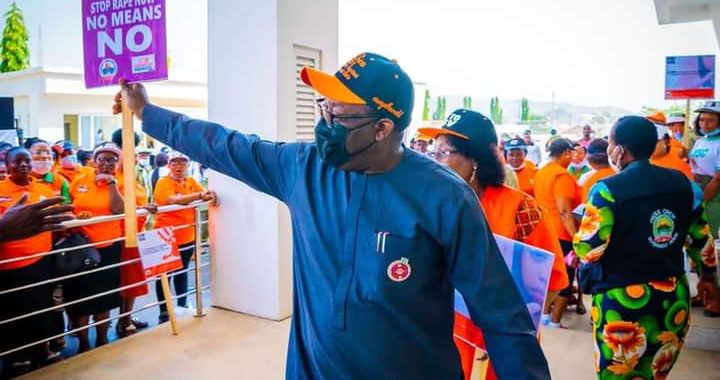 …says women’s rights should not be subverted by Patriarchy

As the Global 16 Days of Activism Against Gender Based Violence came to a close in Ekiti State with an awareness march round Ado Ekiti, on Friday, The Governor of Ekiti State, Dr Kayode Fayemi has called on men to sign up to the process of ending the menace by ensuring that women and girl child are adequately protected against all forms of violence.

Addressing hundreds of activists shortly after the sensitization march terminated at the Governor’s Office, Dr Fayemi stressed the need for all and sundry to be involved in the fight against gender based violence saying women’s rights should not be subverted by patriarchy.

The Governor revealed that his administration had initiated the fight against women’s rights violation since 2010 with a number of policies and legislations which was upgraded to Violence Against Persons’ Prohibition Act.

He commended the Gender-Based Committee members for establishing GBV clubs in schools to address the problem and to raise the consciousness of the young girls in schools. He stressed the need to work with the theme of this year’s 16 days of activism against sexual violence which is ‘sustaining the gains’ by ensuring that everyone in the state sign up to the whole process.

Dr Fayemi said his administration would not relent in putting in place institutions and other empowerment processes that will at least reduce poverty, power relation which expose women and girl child to undue humiliation from the menfolk.

According to him, “We have also insisted that our men must be signed up to it, so you’ve taking this campaign to the traditional rulers, to our fathers, you’ve taking it to our husbands, to our sons because it’s also about socialization and how we raise the boy child alongside the girl child in order to ensure that they have an understanding that they are all human beings, and humanity matters more than preferential treatment to a particular gender.

“We’ve done several other things to try and ensure that women’s rights are indeed human rights and that they cannot be subverted by patriarchy, which is of course traditional, cultural and religious in many ways and represents forms of impediments that we must respond to and correct in the course of dealing with this heinous crime that we have seen around us, defilement of the girl child, domestic violence, rape, sexual harassment, the entire gamut sexual and gender based violence.

“Ensuring that this is sustained, is something we must all collectively work on together. I know you are doing a lot to establish processes, procedures and institutions that will take this further, however, we must empower, support and fund those institutions on a sustained basis and even incorporate them within our budgetary framework to ensure that even when this government is no longer there.

“Our women must enjoy the rights and benefits that have come to them under this administration regardless of whoever takes over in the state. That is sustaining the gains, that is the task ahead of us, that is what we must all do together in order to maintain our position as a leader state in this quest for ensuring that the rights of our women are rights that are protected and defended.

“We must put in place institutions and other empowerment processes, because some of these things are product of poverty, some of them are product of power relation, so if our women don’t have work to do and you say they should not depend on a man, we are just deceiving ourselves. So we must also provide mechanism that will empower our women and our girls so that they don’t become susceptible to the machinations that our corrupt, difficult and unfair systems bring about, and that’s what patriarchy does.

Earlier, Wife of the Governor and Chair of the GBV Management Committee, Erelu Bisi Fayemi expressed her appreciation to the Governor for his support and strong political will aimed at ensuring that GBV was given adequate attention in the state.

Erelu Fayemi, who is also the Chair of GBV management committee in the state lauded all different segments of the state including members of the committee that took part in the march for coming out in their numbers and promised that government would not relent at ensuring that women and girl child are well protected.

Also at the event were the Commissioner for Information and Values Orientation, Hon. Akinbowale Omole, Head of Service, Mrs Peju Babafemi and members of the GBV Management Committee. 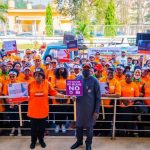 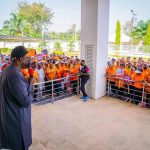 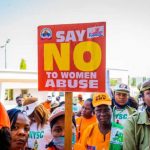